Antifa Rioter Throws Molotov Cocktail at Police, Only Succeeds In Lighting His Comrade on Fire 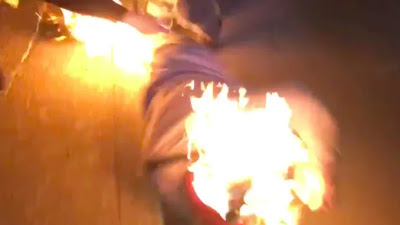 Footage from the hundredth night of violent rioting and destruction in Portland shows a violent Antifa militant hurling a Molotov cocktail at the police, but only succeeding in hitting one of his comrades, lighting him on fire instead.

Given Antifa’s goal of abolishing law enforcement, it was ironic and telling that a police officers who was the target of the Molotov cocktail stepped in and put the fire out, potentially saving the Antifa militant’s life.

After the man dances away from the explosion with his feet on fire, fellow rioters can be heard telling him to “stop, drop, and roll” and instructing him to take his shoes off before he is completely engulfed in flames.

A Twitter described the twinkle-toed rioter’s dance as the “Antifa shuffle”.