Biden Supporter at Rally Screams at Cops: ‘Blue Lives Do NOT Matter’ 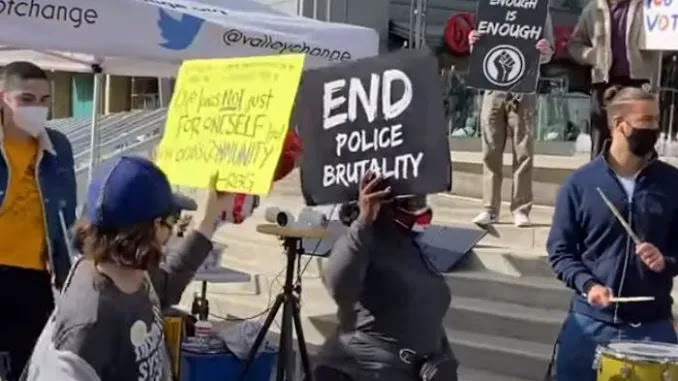 A woman at a Biden rally in Los Angeles on Saturday was filmed screaming at local police “blue lives do not matter.”

The unhinged woman was captured yelling abuse at an LAPD officer wearing a Thin Blue Line flag on his uniform.

The incident was captured by videographer Tomas Morales.

She then declared the officer to be a ‘Blue Lives Matter protester.’

“The Blue Lives Matter protester right here,” she shouted at a supervisor.

“You put him in the very front, on purpose.”

The woman then complained that the flag on the officer’s uniform was “hate speech.”

DTLA: 3 Mexican flags are waved in support of Biden.

A sign can be seen that reads “Burn it all Down” pic.twitter.com/1rHA7z583c

Lawenforcementtoday.com reports: Some protesters (?) at the Biden rally waved Mexican flags in celebration of Biden’s election being called by television networks, although there will be litigation to go through before any such narrative is confirmed.

As Biden asked for the country to “come together” after he thought he was in fact elected president, the far-left wackjobs in attendance at the rally apparently thought otherwise.

The loons were dancing around and singing “Fuck Donald Trump.”

Yup, nothing to bring the country together than a bunch of nuts dismissing over 70 million people who voted for President Trump.

Other people carried “Viva Mexico” flags, while others carried signs that read, “Burn it down.” Sounds like a group of people who are willing to assimilate into American culture, and “heal the divide.”

Yet another video showed snowflake soy-boys carrying signs which they claimed were stolen Trump-Pence signs painted over with “Fuck Trump.”

I asked him where he got those signs, he said from someone’s yard & then laughed. pic.twitter.com/pvuwwhNFqT

We were repeatedly told that if only Donald Trump was defeated everything would revert back to sunshine and lollipops. Not on your life.

The unhinged left take the preliminary election results as an affirmation of their lunacy. They refer to Republicans as “the party of hate” but as you can see with your own eyes, they are what they speak of. We can pretty much guarantee you that American patriots will not take this lying down.