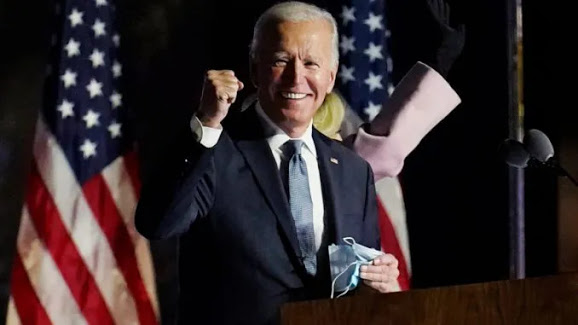 Mark Morgan a former US Customs and Border Protection Commissioner said that President Joe Biden managed to make America less safe within hours of being sworn-in on Wednesday.

Biden’s executive order on the border wall is ‘driving the next illegal immigration crisis,’ he said

He said that Biden’s executive orders which end Trump ‘s Migrant Protection Protocol and stop construction on the border wall is ‘driving the next illegal immigration crisis,’ and placing the lives of Americans’ in danger.

Morgan said: “With the stroke of a pen, President Biden made this country less safe….t’s pure politics over public safety.”

Breitbart reports: Morgan said he was amazed at how quickly he transitioned on these issues without taking the time to talk to the experts in Border Patrol and CBP about the direct impact of the executive orders that ended border wall system construction and the highly successful “Remain in Mexico” program.

“Look, I know what our team said to the transition team,” the former commissioner explained. “I know the facts and data and analysis that was provided. I know what they told them and gave them that that showed that the wall works.”

“Again, it’s part of that multi-layer strategy of infrastructure, technology, and personnel that we’ve discussed,” he stated. “It’s not just a wall.”

“So this was this is something we’ve been saying was the most dangerous thing that he’s been saying all along, that he was going to get rid of on day one, and that’s what he did,” the commissioner stated. “That policy alone attributed to the absolute reduction of [migrant] families coming up from Central America.”

From the peak of the migrant border in May 2019 to February 2020, CBP reported a 92 percent reduction in the number of Central American migrant families crossing the border from Mexico, Breitbart Texas reported.

During a press conference in March, Morgan told reporters:

Back in May, 61 percent of those we were encountering were families, the majority of those from the Northern Triangle countries. Because, again, they (transnational criminal organizations — TCOs) knew our system was broken. If you came to the U.S. with a kid you were going to be released into the interior of the U.S.

So, the major goal that we set out to do with the President’s strategy with respect to this was to decrease the flow of families from the northern triangle countries. We have succeeded nine months in a row those numbers, families from Northern triangles have gone down and continue to go down.

Last weekend, thousands of Honduran migrants forced their way across the Guatemalan border with an intent to make their way to the United States after Biden took office.

Morgan said this is a direct result of Biden’s “open border strategy.”

“Don’t take my word for it,” he said. “Listen to the migrants themselves. Quote, ‘Biden told us we have 100 days to get to the US border.’”

Some of these migrants presented fake COVID-19 test results to Guatemalan border security officials in an attempt to be allowed passage through the country.

In preparation for the expected increase in illegal border crossings due to Biden’s border security and immigration changes, CBP officials scheduled construction of a new soft-sided processing center, Breitbart Texas reported this week.

“We knew our facilities would become overwhelmed like they were in 2019,” Morgan told Breitbart. “Bottom line — we’re getting ready for another illegal immigration surge.”

Morgan said his tenure as CBP commissioner was not about politics.

“It was about law and order,” he said. “It’s about the safety and sovereignty of this great nation.”

“It’s just frustrating what I’m seeing right now,” Morgan concluded. “To me, it’s all politics. It’s all about politics. And our country’s less safe because of it and it’s just disgusting.”