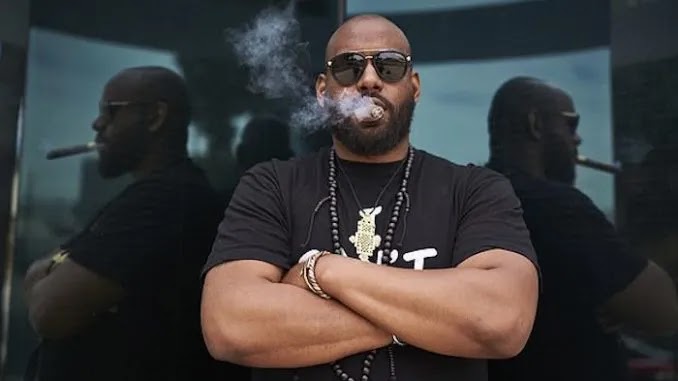 Hawk Newsome, Chairman of BLM’s Greater New York chapter, says the black rights group is ‘mobilizing‘ its base and developing a highly-trained ‘military‘ arm to achieve the movement’s goals “by any means necessary.“

In an exclusive interview, Newsome says the BLM movement has marched for years to wake people up to the realities of police brutality and oppression.

‘It’s our obligation, it is our duty to provide people with a pathway forward,’ he said.

‘We want liberation. We want the power to determine our own destiny. We want freedom from an oppressive government, and we want the immediate end of government sanctioned murder by the police.

‘And we prepare to stop these government sanctioned murders by any means necessary.

‘We are preparing and training our people to defend our communities.’

DailyMail report: The bold and potentially inflammatory statement will likely infuriate those who have grown angry with days of BLM protests that have sparked violence and destruction across America.

Newsome is currently in Los Angeles – a city devastated by rioting this past few days – where he held a think tank attended by members of the BLM Greater New York leadership and ‘military advisors‘.

The meeting was held at the offices of NCredible Entertainment, owned by actor and musician Nick Cannon, a fervent BLM supporter who also attended.

In a conference room at the trendy compound in Burbank, Newsome said the group hammered out details of the ‘Black Opts’ blueprint – which stands for Black Opportunities – a new direction he hopes will be the beginning of the liberation of black people.

Black Lives Matter has tens of thousands of activists protesting the death of George Floyd in dozens of cities around America and across the world.

And BLM’s Greater New York chapter has emerged at the forefront of the movement as black rights become a topic for debate.

Newsome, 43, an imposing 6ft 6in, who wore shades and smoked a thick cigar for our photo shoot, believes his group can lead the ‘war on police’.

He says the police have waged war on black people for decades but his chapter is ‘escalating‘ the battle.

Newsome, wearing a black ‘I Can’t Breathe’ T-shirt with beads and an Ethiopian religious cross pendant around his neck, said his group has military advisors on board to get the job done.

‘We have black Special Forces officers advising us, and we will teach and train people in our communities, the Black Ops department of Black Opportunities,‘ he said.

‘What we’ll see is people put in place to defend our communities from police who will murder us and get away with it.‘

In a move reminiscent of the strategy adopted by the controversial Black Panther Party in the 1960s, Newsome said BLM will create ‘Peace Officers’ who will patrol black communities to challenge law enforcement and stop police brutality.

Asked if the ‘Peace Officers’ would be armed and open carry their guns in the states that allow it, he said: ‘Yes, absolutely.’

Founded in 1966 the Black Panther Party’s core practice was its open carry armed citizens’ patrols – known as cop watching – to monitor the behavior of officers of the Oakland Police Department and challenge police brutality in the city.

But members of the BPP were involved in a string of fatal firefights with police, while many others were convicted of assaulting dozens of police officers.

However, the group emerged as one of the most influential black movement organizations of the late 1960s and at its height in 1970 it had 68 offices and thousands of members across America.

The BPP also became synonymous with the Black Power symbol – a symbol displayed on a giant banner on the wall at Nick Cannon’s offices, which Newsome posed for photos in front of.

The BLM chapter chairman doesn’t hide from the fact that his group’s blueprint replicates some of the ideologies of the BPP.

‘We pattern ourselves after the Black Panthers, after the Nation of Islam, we believe that we need an arm to defend ourselves,’ he says.

‘I don’t see us working with police. I see us policing ourselves. I see us teaching black people how to police their own communities.‘

Newsome says his chapter is now raising a ‘war chest’ and plans to build a headquarters in an unused church in New York.

But while big money donations have been flooding in from celebrities and high worth individuals, he insists his group won’t accept the ‘corporate dollar’.

‘We’ve never received a corporate dollar as Black Lives Matter, Greater New York,‘ he said. ‘We’ve had an immense amount of support from Nick Cannon. We’ve had support recently from Rihanna and her Savage Fenty brand.

‘But most of our donations are small dollar donations from regular people of all colors, who respect what we stand for.

But as rioting continues across the nation, Newsome refused to call for an end to the violence and looting.

Instead he believes the world needs to be more ’empathetic’ towards the rioters.

‘You’re talking about people who have been told time and time again that their black lives don’t matter,’ he said.

‘You’re talking about a people who witnessed their peers and their family members incarcerated at unfair rates.

‘You’re looking at people who are miseducated and then to add insult to injury, the government allows police to come in and kill us and allow police officers to continuously get away with killing us. Any person would be outraged.‘

Newsome said the looting is ultimately a product of capitalist America and its treatment of the black community.

‘They want to go out and grab all those things that America told them that they should have, but they couldn’t have,‘ he said.

Newsome, who has a law degree and was a project manager at a law firm before becoming full-time activist, says Black Lives Matter Greater New York has risen to the point where it is one of the most effective BLM organizations in the world.

He described its president, 19-year-old Nupol Kiazolu, as the second most influential young activist behind Greta Thunberg.