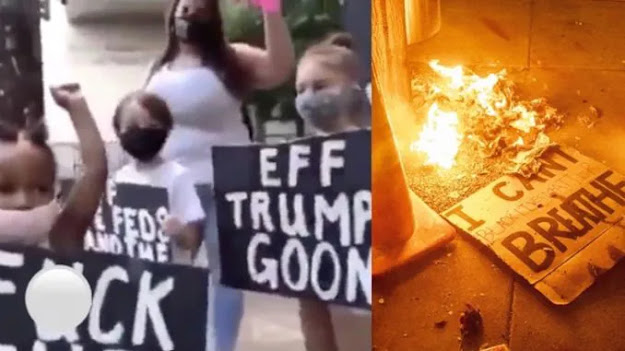 WARNING: The following video contains graphic language that some viewers will find offensive.

Toddlers and very young children are marched outside the Portland federal courthouse. They carry signs and say, “F— the police” on cue from the adults. One toddler does the black power fist. #BlackLivesMatter pic.twitter.com/Xr4ubMrKZs

The streets of Portland look like this every night. When will this end?

Just got hit by a rubber bullet impact round on my upper left arm pic.twitter.com/fsesx2vdRo

WesternJournal report: This is the scene outside the Portland Federal Courthouse — which probably wouldn’t be the place to bring your kid at a time like this, but never mind. Posted on Thursday, it shows young kids being told to recite “f— the police” for the camera.

Lest we think the cameraman coaxed it out of them — a bit of social media entrapment — they’re already carrying signs saying “F— the Police,” “Eff Trumps Goons” and “Eff the Feds and the Police.”

We also have one of the responsible adults in the troupe holding a sign saying “F— Ted Wheeler.” He’s the incredibly permissive mayor of Portland, who apparently is an ideological target of people who’ve brought their children to an area known for riots with placards saying “F— the Police” and yet don’t seem to be facing police interference because  Wheeler, among others, cannot muster the political will to end this. That’s gratitude for you.

No word at press time why these parents decided not to go all-in on the placards and merely wrote “Eff Trumps Goons” and “Eff the Feds and the Police.” I guess they figured there were children around and they didn’t needed to be subjected to such vulgar language — unless those children were saying it, of course.

And for the younger set, we also have parents bringing their kids to the nightly riots in a Babybjörn:

The two worst parents ever brought a baby to the riot where teargas and other crowd control munitions are being used. pic.twitter.com/QfMxGHZKSa

It was the video of the kids saying the darnedest things about police officers that seemed to garner the most attention, however:

The two worst parents ever brought a baby to the riot where teargas and other crowd control munitions are being used. pic.twitter.com/QfMxGHZKSa

When you’re a parent or guardian, values matter. Protests pass into history; some accomplish their goals, others are sound and fury, signifying nothing. Whether your child was at that protest will have little effect on the success or failure of the cause. Why your child was there, however, is a different story.

This isn’t Hands Across America. This isn’t the March on Washington or the Million Man March or even that fatuous meta-protest Jon Stewart and Stephen Colbert threw for themselves a decade ago. This is Paris 1968 stuff, complete with tear gas and projectiles.

And how are these kids there to participate? They’re props. Not only that, they’re props being forced in front of the cameras by their parents and told to repeat base vulgarities about police officers.

Speaking in defense of the protesters — who were being criticized as having created a “white spectacle” by the head of the Portland chapter of the NAACP — city commissioner Jo Ann Hardesty said the movement had brought in “a lot of new, aware folks who have joined into the battle for Black lives.”

If this is part of what awareness looks like — the willingness to abdicate parental values to use your child as a coarse puppet for perverse values — God help us all.