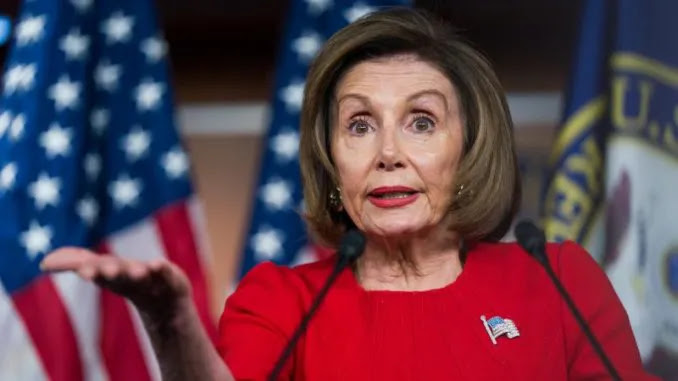 “Sadly, the domestic enemies to our voting system are right at 1600 Pennsylvania Avenue with their allies in the Congress,” Pelosi said referring to the address of the White House in Washington, DC. on Monday’s MSNBC’s Live.

“They’re doing everything they can to suppress the vote, scare people by intimidation,” she added, calling Trump and the Republicans “enemies of the state.”

The phrase “domestic enemies” has a very specific meaning in US politics, as all American officials and naturalized citizens take an oath to defend the Constitution “against all enemies, foreign and domestic.”

Trump has been on the receiving end of much outrage, from both the media and Democrats, since he first called “fake news” outlets “enemies of the people,” shortly after he took office in 2017. In August 2018, he argued that the “dangerous and sick” mainstream outlets “purposely cause great division & distrust” and “can also cause War!”

Pelosi’s comments haven’t attracted nearly as much scrutiny, just yet. They come in the wake of accusations by Democrats that Trump was trying to “sabotage” the 2020 election by withholding funding from the US Postal Service.

Every single House Democrat and 26 Republicans voted on Saturday in favor of a bill that would give the USPS $25 billion in funding, to enable universal voting by mail. Some 70 lawmakers cast their votes by proxy, under emergency pandemic rules instituted by Pelosi.

Trump has opposed the proposal, however, arguing that all-mail voting would be an invitation to mass fraud. The bill is unlikely to become law without the approval of the Republican-majority Senate.