Couple Under House Arrest After Testing Positive for Coronavirus In Kentucky 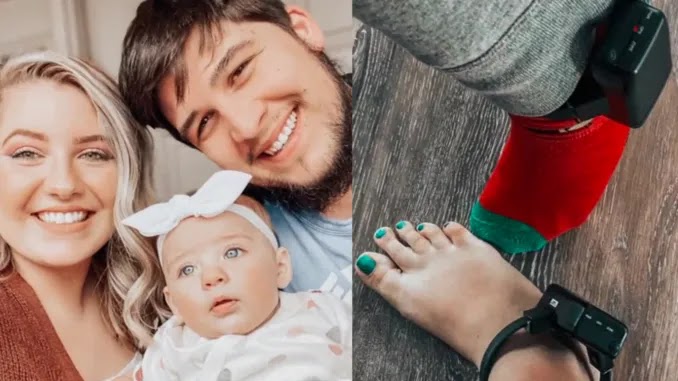 A Kentucky couple have been placed under house arrest and made to wear ankle monitors after the wife tested positive for coronavirus and refused to sign a self-quarantine order, according to multiple reports.

Elizabeth and Isaiah Linscott said authorities from the health department and sheriff’s office showed up at their home in Radcliff, Kentucky on Thursday because she refused to sign the order.

The Mail Online reports: the woman had voluntarily tested for COVID-19 before going to visit her parents out of state and found she was positive but without symptoms.

She was told to sign a self-quarantine order  that restricted the family to their home unless she first contacted the Hardin County Health Department, WBTV reported.

Elizabeth said she declined to sign the order because it meant she would have to wait and contact officials before seeking urgent medical treatment if she became very sick with the deadly virus.

A spokesperson from the Hardin County Health Department was not immediately available when DailyMail.com reached out for comment.

Elizabeth recalled she had gotten herself tested for COVID-19 as a precaution before going to visit her parents and other family.

‘My grandparents wanted to see me, too,’ she said. ‘So just to make sure if they tested negative, that they would be OK, everything would be fine.’

The woman said that she was contacted by health officials after receiving a positive test result, which was when they asked her to sign the self-quarantine order.

Even though she declined to sign, Elizabeth told WBTV that she would still have followed the appropriate precautions if she had required medical treatment, including disclosing that she had tested positive.

Her failure to sign the ‘Self-isolation and Controlled Movement Agreed Order,’ brought an unexpected visit from the Hardin County Sheriff’s Office on Thursday.

‘I open up the door and there’s like eight different people,’ said her husband Isaiah, who was home when authorities showed up, reported WAVE3.

‘Five different cars and I’m like what the heck’s going on? This guy’s in a suit with a mask, it’s the health department guy and he has three different papers for us. For me, her and my daughter.’

The ankle bracelets they now wear will alert authorities if the couple gets more than 200 feet from their home.

‘We didn’t rob a store, we didn’t steal something, we didn’t hit and run, we didn’t do anything wrong,’ Elizabeth Linscott told WAVE3.

She added that her intentions were not to defy the self-quarantine.

‘That’s exactly what the Director of the Public Health Department told the judge, that I was refusing to self-quarantine because of this and that was not the case at all,’ Linscott said.

‘I never said that.’