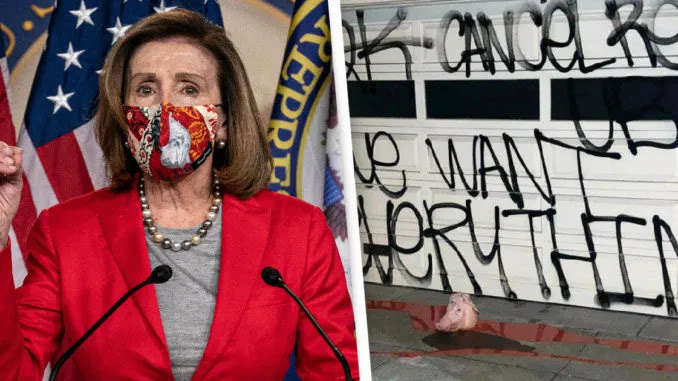 It was also spray-painted with a message appearing to allude to the failed $2,000 stimulus checks.

Mail Online reports: The message appeared to be in reference Pelosi’s recent efforts to increase the second round of COVID relief checks to $2,000, which have been repeatedly rejected by Senate Majority Leader Mitch McConnell.

The vandals also spray-painted two letter As enclosed in circles, most commonly known as the symbol for anarchism.

Underneath the disturbing message on the driveway was a pool of red paint with a pig’s head placed at the center of the pavement.

According to TMZ, San Francisco Police had been called to the home on reports of vandalism at the property in the early hours of New Year’s Day.

Officers arrived around 3am and documented the incident in a report, but it is unclear if there are any suspects. DailyMail.com has reached out to the San Francisco Police Department for comment.

VandenBerghe, a self-proclaimed patriot and independent journalist that has been featured on conservative news outlets in the past, accused police in her post of trying to cover up the incident after the city reportedly called in the vandalism.

‘City called to clean up at 3am & police attempting to stop photos of scene. Media SILENT,’ she tweeted.

The San Francisco mansion is located in the city’s swanky Pacific Heights neighborhood and counts as one of Pelosi’s several residences in California.

The four-bedroom, three-bathroom house has an estimated worth of $5.4million, according to property records. 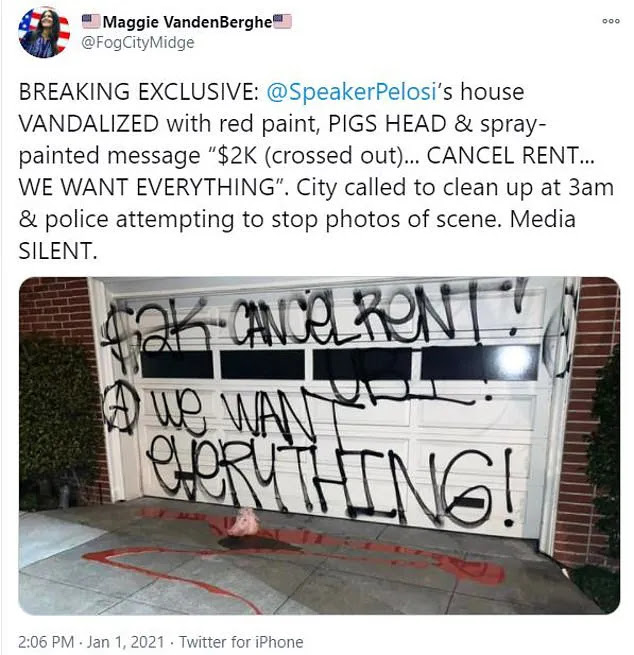 The home was also once the site of a small protest in September, when Pelosi came under fire for getting her hair styled at a local salon that had been closed under COVID-19 restrictions.

The Speaker of the House is yet to comment on the incident as of Friday evening.