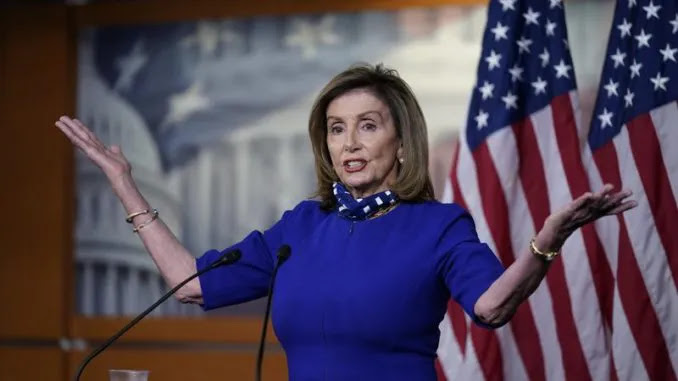 (Paranormal) Nancy Pelosi has introduced a rules package that eliminates the use of gendered terms like ‘mother’ ‘father’ ‘son’ and ‘daughter’ from the House.

In an official press release, the House Rules Committee said the changes would ensure that “we are inclusive of all Members, Delegates, Resident Commissioners and their families… including those who are nonbinary.”

Breitbart reports: House Speaker Pelosi went on to say she is “pleased to join Chairman Jim McGovern in introducing this visionary rules package, which reflects the views and values of the full range of our historically diverse House Democratic Majority.”

“Thanks to the leadership of Chairman McGovern and our Members, Democrats have crafted a package of unprecedented, bold reforms, which will make the House more accountable, transparent, and effective in our work to meet the needs of the American people,” said Pelosi.

“These future-focused proposals reflect our priorities as a Caucus and as a Country,” the House Speaker added.

Within the proposals are the creation of the “Select Committee on Economic Disparity and Fairness in Growth,” which would require Congress to “honor all gender identities by changing pronouns and familial relationships in the House rules to be gender neutral.”

1 Anonymously • 16:08, 02.01.2021
Nancy Pelosi pristatė taisyklių paketą, kuris pašalina iš namų lyčių lygybės terminų, tokių kaip „motina“, „tėvas“, „sūnus“ ir „dukra“, vartojimą.
TAIP PAT SKAITYKITE:
22.01.2021 laikas 09:58 The most important legal pathway that would allow Trump to reclaim the Presidency
If the 45th President of the United States is serious about addressing the 2020 election fraud that deprived him of another four years of service to the republic of the United States, then his legal team should begin to pursue a new legal strategy using a writ of quo warranto....