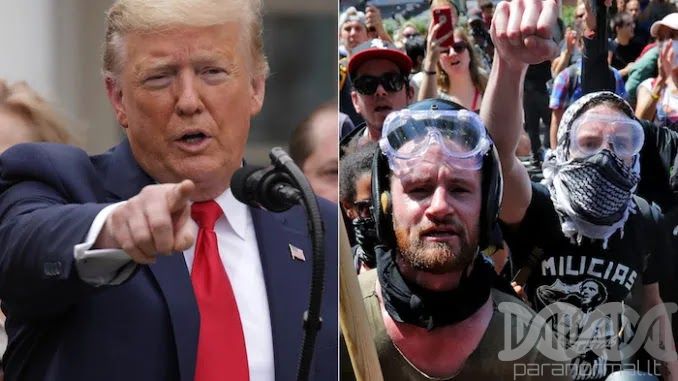 President Trump officially declared Antifa a terrorist organization on Sunday – meaning leaders of the far-left group can now be rounded up and incarcerated for attempting to destroy America.

“The United States of America will be designating ANTIFA as a Terrorist Organization,” Trump wrote on Twitter.

The president’s announcement comes after ongoing rioting and looting in several cities across the U.S.

“The violence instigated and carried out by Antifa and other similar groups in connection with the rioting is domestic terrorism and will be treated accordingly,” Barr wrote.

Trump blamed the violence on “Radical Left Anarchists” thanking the National Guard for helping quell the riots in Minneapolis.

He urged other cities and states to do the same.

“The National Guard did a great job, and should be used in other States before it is too late!” he wrote.

The president lamented that Democrats in Minnesota waited to fully deploy the National Guard, and warned other localities not to make the same mistakes.

The president on Saturday afternoon called for an end to looting and destruction, during a speech at NASA headquarters in Florida.

“It does not serve the interests of justice or any citizen of any race, color, or creed for the government to give into anarchy, abandon police precincts, or allow communities to be burned to the ground,” he said. “It won’t happen.”

Congratulations to our National Guard for the great job they did immediately upon arriving in Minneapolis, Minnesota, last night. The ANTIFA led anarchists, among others, were shut down quickly. Should have been done by Mayor on first night and there would have been no trouble!

Other Democrat run Cities and States should look at the total shutdown of Radical Left Anarchists in Minneapolis last night. The National Guard did a great job, and should be used in other States before it is too late!

The United States of America will be designating ANTIFA as a Terrorist Organization.