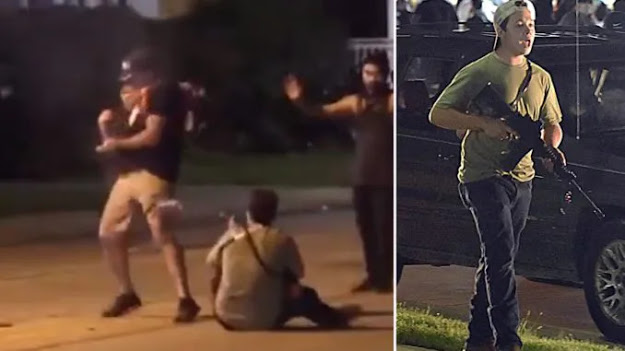 The armed rioter who fired the first shots from behind Kyle Rittenhouse during the fatal incident in Kenosha has been charged, strengthening the case that Rittenhouse had reason to fear for his life and was acting in self defense when he shot and killed two rioters.

Joshua Ziminski, 35, has been charged with disorderly conduct and use of a dangerous weapon for firing his weapon during the riot in Kenosha, Wisconsin on August 25.

According to the charging document, while investigating the shooting by Rittenhouse, Kenosha detectives obtained videos in which Ziminski “was holding a black handgun, which he was holding in his left hand, pointing downward. Detective Howard reports that in reviewing multiple other videos, he was able to see the defendant and Kelly Ziminski, in and around multiple other people on the streets, and the defendant was seen holding the handgun down at his side in said videos.”

“Detective Howard observed a muzzle flash emit from the handgun, and heard a gunshot at the same time. In another video, the defendant is clearly seen at that same location. The defendant is seen walking in the same area, holding his right arm upwards, and firing off one shot from his handgun. The defendant and his wife are then seen leaving the area. Several other people are in the nearby vicinity when the defendant fires the handgun.”

The police go on to report that when speaking to Ziminski, and his wife who was present at the time, both admitted that he had fired off a “warning shot” into the air.

This strengthens the case that Rittenhouse had reason to fear for his life and was acting in self defense when he shot and killed two rioters.

A New York Times timeline of events of the shooting states, “while Mr. Rittenhouse is being pursued by the group, an unknown gunman fires into the air, though it’s unclear why. The weapon’s muzzle flash appears in footage filmed at the scene.”

“Mr. Rittenhouse turns toward the sound of gunfire as another pursuer lunges toward him from the same direction. Mr. Rittenhouse then fires four times, and appears to shoot the man in the head,” the Times report continues.

Don’t believe a rioter fired the first shot? There’s video. We must demand media covers Kyle Rittenhouse’s story honestly. Kyle was the victim, not the aggressor. Just like Covington Catholic we can’t let them destroy an innocent young man. pic.twitter.com/2oxLCecADX

GWP report: Rittenhouse, 17, is charged with first-degree intentional homicide. He is currently in a juvenile detention center in Lake County without bond and is due to appear in court again on October 30.

It was reported on Tuesday that Rittenhouse will not be charged in Illinois for the weapon used during the riot.

Rittenhouse is a community lifeguard who was working in Kenosha the day of the shooting.

In a previous statement from Rittenhouse’s defense team, they explained that he was acting in self defense.

“Kyle stopped to ensure care for the wounded attacker but faced a growing mob gesturing towards him. He realized he needed to flee for his safety and his survival. Another attacker struck Kyle from behind as he fled down the street. Kyle turned as the mob pressed in on him and he fell to the ground,” his legal team says.

“One attacker kicked Kyle on the ground while he was on the ground. Yet another bashed him over the head with a skateboard. Several rioters tried to disarm Kyle. In fear for his life and concerned the crowd would either continue to shoot at him or even use his own weapon against him, Kyle had no choice but to fire multiple rounds towards his immediate attackers, striking two, including one armed attacker. The rest of the mob began to disperse upon hearing the additional gunshots.”