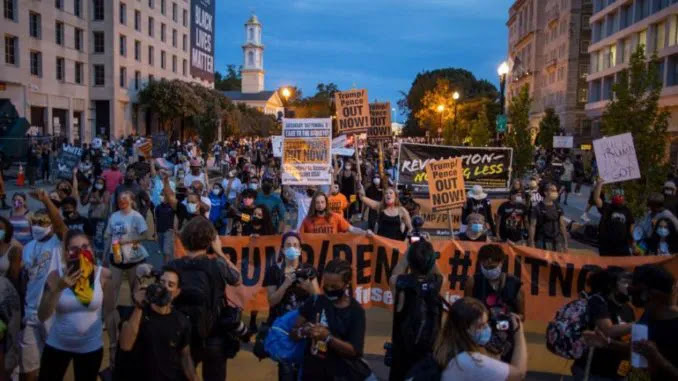 They then confronted, heckled, and even assaulted RNC attendees as they were leaving.

Hurling expletives and calling them racist, the BLM activists shouted abuse at anyone who happened to cross their paths including a group of elderly people and Senator Rand Paul.

RT reports: US President Donald Trump gave a speech to a live audience of more than 1,000 attendees and formally accepted the Republican nomination for president on Thursday evening, to a backdrop of fireworks, GoGo music and Black Lives Matter chants. It wasn’t long before protests and peaceful demonstrations turned ugly, however.

As a group of elderly attendees attempted to leave the RNC, activists screamed in their faces, hurled insults and flipped them the bird in a torrent of vitriolic abuse.

The anti-racist protesters didn’t discriminate, however, and hurled abuse at any and all attendees who happened to cross their paths.

An elderly white man was struck in the head amid claims he assaulted a female protester, though he insisted he was just there to see the fireworks. Elsewhere, demonstrators decapitated a Trump effigy with a guillotine, while others pretended to shoot a person in a police officer costume.

Senator Rand Paul (R-Ky) and his wife Kelley were surrounded by a baying mob of protesters who chanted Breonna Taylor’s name and engaged in scuffles with police.

However, provocateurs and agitators did arrive to further inflame the situation with the protesters, including a white man dressed in blackface who was punched in the face by an unknown assailant as he was being removed from the area by police.