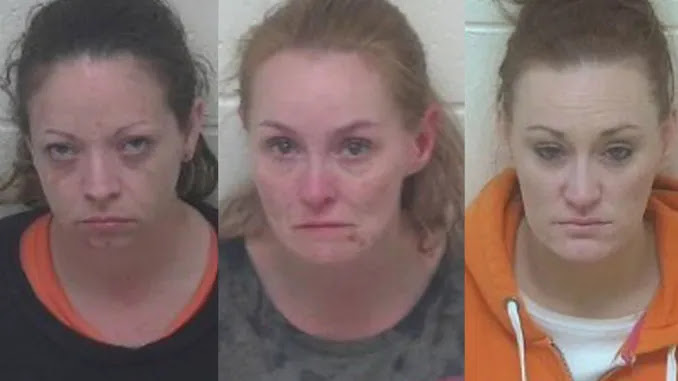 Nine people have been indicted on an array of sickening pedophilia and child sex trafficking charges related to an Ohio pedophile ring that allegedly gave illegal drugs to young mothers in exchange for sexual access to their children.

The pedophile ring investigation first made headlines in March, when Larry Dean Porter, 69, of Wheelersburg, Ohio, and several others, including three local mothers, were arrested in connection with allegedly sexually molesting several children as young as 3-years-old.

According to a Department of Justice announcement, Larry Porter was arrested – with the help of the Jackson County Sheriff’s Office – after a sting in which he allegedly offered, via Facebook messages, to pay $80 to molest a 7-year-old girl.

DailyMail report: During the sting’s pre-arranged meeting, the DOJ said, Larry Porter allegedly said that he would be ‘be done around midnight’ and could return the girl at that time.

The DOJ said that the FBI’s Child Exploitation Task Force first began investigating Larry Porter in April 2019, after receiving reports from sources alleging that he gave parents of male and female children illegal drugs in exchange for receiving their consent to sexually abuse their children.

Authorities said that victims and additional sources told the FBI and the Ohio Bureau of Criminal Investigations (BCI) that Porter had sexually abused children and produced child pornography, which he supposedly kept on flash drives and ‘used extreme methods to conceal.’

In addition to supposedly providing drugs to the underage, sexual abuse victims’ parents in exchange for their consent, Larry Porter was alleged to have told the parents to participate in the abuse of their own children so that he could record it to use as blackmail.

Following his arrest, the DOJ said in its June release, that Porter – while in jail –  made numerous phone calls and sent three letters to relatives and associates in an attempt to have them lie under oath, convince other witnesses to lie to authorities or tell sources not to give information to police.

The DOJ said that it was alleged that in the days following their father’s arrest, Denna and Crystal were seen making multiple trips to Larry Porter’s property and digging holes in the ground of it.

When authorities searched the grounds where the women were digging, they found an SD memory card buried inside a glass jar.

Three people who allegedly made children available to Larry Porter were also among the indicted.

Joshua David Aldridge, 36, of South Webster, Ohio, allegedly transported minor victims to Larry Porter’s home in exchange for illegal drugs. Authorities did not reveal the relationship between Joshua Aldridge and the children.

Charity Ann Rawlins, 41, of South Webster, Ohio, and Ronnie L. Rawlins, 47, of Oak Hill, Ohio, allegedly took a seven-year-old child to Larry Porter’s home on a regular basis, so the child could be sexually abused in exchange for pills.

Authorities didn’t specify what the relationship between the couple and the child is, but noted that the abuse had occurred multiple times a week for up to five years.

Another one of Larry Porter’s relatives was charged in the trafficking ring – his cousin, Erroll Wayne Porter, Sr., 69, of Wheelersburg.

Authorities said that during recorded jail calls, the cousins talked about somebody they thought might’ve been the law enforcement’s source.

According to the DOJ, Erroll Porter said during one call that he ‘got some things working there, trying to take him down.’

During another call, Larry Porter allegedly told Erroll Porter to ‘Go out and make sure that idiot don’t do something. If you have to put a slug in that son-of-a-b***h.’

In early July, an unsealed arrest warrant revealed that a 10th person was also arrested in connection with the trafficking ring, although he was not part of the group that was indicted by the grand jury.

On July 1, authorities took Larry Porter’s son-in-law, Ralph Albert Aldridge, of Columbus, into custody, according to The Daily Independent, which obtained the arrest warrant.

Authorities said that during their investigation into Larry Porter, they received information stating that Ralph Aldridge would travel to see Larry Porter at least once a month to deliver a least a pound of marijuana to him.

The information also indicated that Ralph Aldridge might’ve been delivering heroin as well.

An informant also gave authorities a secret recording which featured Ralph Aldridge  talking about going to Larry Porter’s home after his March arrest to search for something in a strawberry patch, which would later be revealed to be the glass jar containing the aforementioned SD memory card with child pornography on it.

Authorities said that Ralph Aldridge told an informant to lie and tell police that they were searching for money and also told an associate of his that he was going to get a gun to ‘take care of business.’

Witnesses told federal investigators they believed Ralph Aldridge intended to kill one of the informants.

Court records also showed Ralph Aldridge allegedly asking friends to hold his phone so that his whereabouts couldn’t be tracked.

In March, ABC 6 reported that three women were arrested on accusations of sexually molesting several children between the ages of three to 13-years-old.

The women were named as: Magan Richmond, 32, of Portsmouth, Ohio; Tasha Stringer, 37, of Wheelersburg, and Kathryn McMullen, 36, of South Webster, Ohio.

Authorities said that the women had taken multiple children to a home – later said to be Larry Porter’s home – where they then traded sexual access to the children for drugs and money.

Stringer allegedly admitted to authorities that she had participated in sex acts with the children at Larry Porter’s request, Oxygen reported.

She was said to have claimed that Larry Porter asked her to recruit her friend, McMullen to ‘bring her kids’ over so they could be assaulted. Stringer allegedly said that she performed sex acts on McMullen’s children.

The police incident report alleged that while at Larry Porter’s home, McMullen also engaged in sexually abusing her own three-year-old daughter and her son, who was six or seven years old, or allegedly watched as they were being molested.

Stringer also allegedly told police that she had watched Larry Porter molesting Richmond’s five-year-old, naked daughter, while the woman was there during a drug deal.

One of the FBI sources that started the spring 2019 investigation into Larry Porter and his associates was ‘someone who ‘had direct access to children and family in the Scioto County community where Porter resided,’ according to court documents, Fox 19 reported.

The informant told the FBI that they saw people who were believed to have been abused by Porter when they were children, grow up and take their own kids to him in exchange for drugs and money.

According to the affidavit, the informant provided specific examples of children who had been taken to Larry Porter’s home. The informant also provided examples of kids observed with signs of physical abuse after the local child protective services agency began investigating the abuse allegations.

In early March 2020, a confidential source told detectives that Larry Porter had called her several years prior, offering her drugs in exchange for allowing her to ‘babysit’ her partner’s two-year-old child.

The source said that Larry Porter used the term ‘babysit’ as a euphemism for the time he would spend with children, either sexually abusing them or taking sexually-explicit pictures of them.

Among the evidence presented in the unsealed affidavit were Facebook messages Larry Porter allegedly wrote to the mother of two girls, as well as to a third daughter of his.

To his third daughter, who was not charged in the trafficking ring and was not named, he allegedly sent a picture of one of his underage victims calling the child ‘my girlfriend’ and asking his daughter not to ‘show anyone ok.’

According to the Facebook message exchange, Larry Porter’s third daughter wrote ‘really,’ to which he replied, ‘isn’t she pretty.’

The daughter then allegedly blasted her father with the message: ‘I told u not to talk to me about that s— u realize ur granddaughter is probably the same age.’

‘lol, but she not my granddauther (sic). I couldn’t b with my own family,’ Larry Porter allegedly replied.

‘I know but she’s young dad s— there’s still good looking ones that’s over 18,’ the daughter supposedly wrote back.

‘that’s true but this 1 is stoned dead in love,’ Larry Porter apparently replied.

His two daughters, Denna Porter and Crystal Porter, are both charged with conspiring to obstruct a child sex trafficking investigation (up to 25 years), destroying or removing evidence (up to five years), and making false statements to law enforcement (up to eight years).

His associate, Frank Andrews is charged with conspiring to sex traffic children, possessing child pornography involving a prepubescent child (up to 20 years), conspiring to obstruct a child sex trafficking investigation, and destroying or removing evidence.

The people who allegedly delivered children to Larry Porter – Joshua Aldridge and the Rawlins couple – are each charged with conspiring to sex traffic children and sex trafficking children.

All of those are federal charges.

It’s thought the sex trafficking ring could date back ‘potentially for decades,’ according to court records.

Chris Hoffman, special agent in charge of the FBI’s Cincinnati division said that ‘The alleged criminal activity in these indictments are some of the most disgusting, perverse and repulsive acts that I have ever heard of in 32 years of law enforcement,’ according to the Columbus Dispatch.

Anyone with additional information about this child sex trafficking ring or who thinks they may have been a victim of it is asked to call the FBI at (614) 315-4923 or Scioto County Sheriff’s Office Detective Jodi Conkel at (740) 351-1091. Source