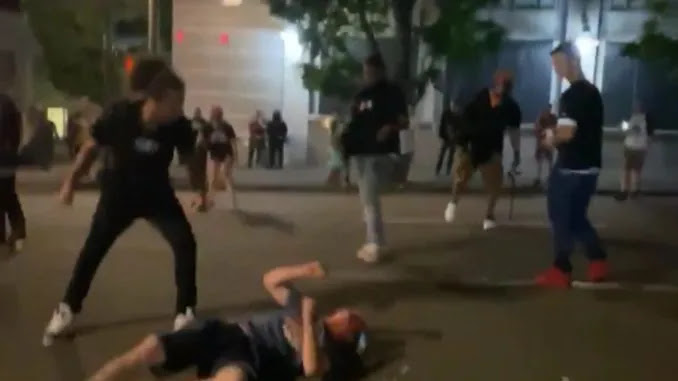 A truck driver was kicked unconscious after black-clad Antifa rioters chased his vehicle and he crashed into the sidewalk in lawless Portland.

Just blocks away from a BLM demonstration in Oregon’s capital, far-left activists dragged the man out of his truck after he was chased by the crowd and he crashed it into a tree last night.

Andy Ngo, a journalist, tweeted several videos and explained that the driver had been trying to protect a woman who was beaten and robbed. Then the mob turned on him.

The driver appeared dazed and was bleeding profusely from the head when he was made to sit on the ground and told ‘wait for police to arrive.’

The man was then knocked unconscious by a vicious roundhouse kick delivered to the back of his head by an Antifa thug.

As the man lay unconscious on the ground, far-left activists chanted ‘Black Lives Matter’ while other rioters attempted to keep him alive.

DailyMail report: Others began ransacking the man’s truck and when questioned by others, explained that they were simply ‘checking for weapons.’

Sgt. Kevin Allen, a police spokesman, said that the rioters ‘were chasing the truck before it crashed, and they assaulted the driver after the crash.‘

The man was rushed to hospital and there has not yet been an update on his condition.

Sgt Allen said that officers ‘encountered a hostile crowd and a squad from the Rapid Response Team responded to help secure the scene while the investigation was underway.’

Earlier footage shows the truck parked outside a 7-Eleven, with some rioters kicking it and attacking the man through the window, as others shout, ‘He didn’t do nothing.‘

The truck then begins speeding away down the street, before crashing into the tree a few blocks away.

Andy Ngo, a video journalist, tweeted several videos and explained that the driver had been assisting a woman who was beaten and robbed.

‘The man who tried to protect her was later beaten himself & kicked unconscious.’ Ngo tweeted.

Drew Hernandez, a journalist who was at the scene, tweeted: ‘Here is what took place before the man crashed his car into a tree here in Downtown Portland BLM thugs began to harass and physically assault him and his female partner in the street for defending someone they robbed. He then began to drive away to evade them.’

Overnight Saturday a riot was declared and police used crowd control munitions, including smoke, to disperse a gathering outside a law enforcement building.

Authorities said people had thrown ‘softball size’ rocks, glass bottles and other objects at officers. Two police officers were treated at the hospital after being hit by rocks. Eleven people were arrested.