Twitter Suspends Donald Trump Jr. After He Goes Against W.H.O. Narrative On COVID-19 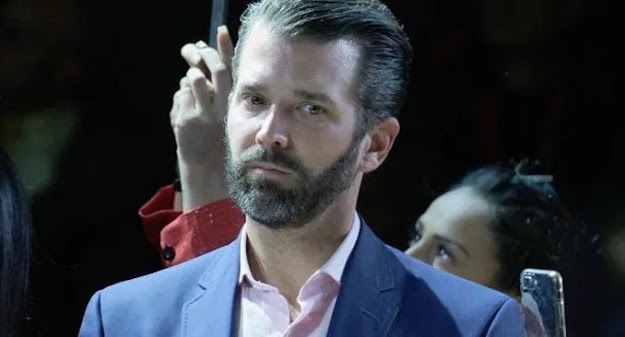 Donald Trump Jr.’s spokesman Andy Surabian explained that the president’s son was suspended for “sharing a viral video of medical professionals discussing their views,” adding that this is “further proof that Big Tech is intent on killing free expression online.“

“Twitter suspending Don Jr. for sharing a viral video of medical professionals discussing their views on Hydroxychloroquine is further proof that Big Tech is intent on killing free expression online and is another instance of them committing election interference to stifle Republican voices,” Andy Surabian said.

The video in question has been banned on the entire Twitter platform for violating rules.

American doctors are holding a “White Coat Summit” in Washington, D.C. to address “a massive disinformation campaign” by the media about coronavirus.

The hugely popular video promotes the use of hydroxychloroquine, an antimalarial drug made famous by President Trump, to combat COVID-19. Medical professionals in the video also claim that masks are essentially useless at preventing the spread of the virus.

The video was hugely popular on Facebook, Twitter and other social media platforms Monday, racking up millions of views before being censored and banned. 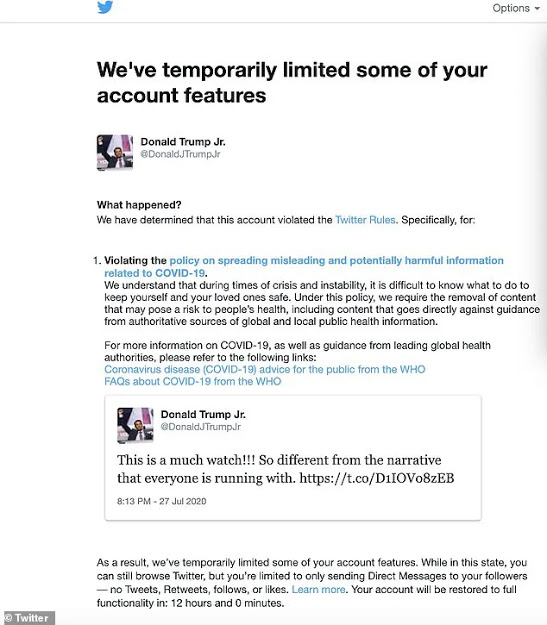 Many observers believe this latest example of Big Tech censorship is the straw that has broken the camel’s back, as President Trump moves forward with his plan to regulate social media.

The Trump administration took a major step on Monday toward fulfilling the president’s executive order on social media, formally asking the FCC to develop regulations that could apply to Facebook, Twitter and other Big Tech platforms.

CNN report the petition for rulemaking “puts the ball in the FCC’s court. The agency must now decide whether to agree to President Donald Trump’s call for FCC oversight of internet platforms.“

Conservative social media users have long complained that Facebook and Twitter censor and suppress their content. Now President Trump and his son, Donald Jr., are experiencing the same treatment as Big Tech goes into censorship overdrive with less than 100 days before the November election.

“President Trump is committed to protecting the rights of all Americans to express their views and not face unjustified restrictions or selective censorship from a handful of powerful companies,” said Commerce Secretary Wilbur Ross in a statement.

So disgusting to watch Twitter’s so-called “Trending”, where sooo many trends are about me, and never a good one. They look for anything they can find, make it as bad as possible, and blow it up, trying to make it trend. Really ridiculous, illegal, and, of course, very unfair!

Trump later threatened to “strongly regulate” or shut down social media platforms. Since then, Twitter and Facebook have only become more censorious, as the latest episode with Donald Trump Jr. demonstrates.