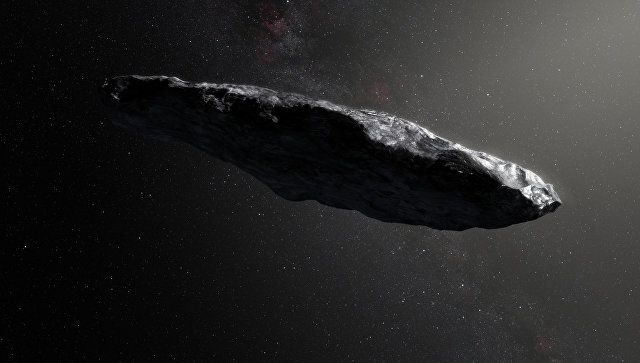 Scientists from the Baltic Federal University named after I. Kant modeled the motion of the asteroid, who arrived in the solar system from the stellar association of the constellation Kiel. The analysis revealed that the age of the object is estimated in billions of years, and it spent about 45 million years on the movement from the previous stellar “station” to the Sun.

About a month ago, astronomers discovered a new asteroid about two hundred meters in length and named it Oumuamua. The object passed at a distance of 0.25 astronomical units (unit of measurement of distances in space, making 149 597 870 700 meters – from the Sun), approaching it even more than Mercury.

However, the uniqueness of this dull asteroid is that it moved with great speed: at the moment of maximum rapprochement with the Sun, it accelerated to an unimaginable 87 kilometers per second! This is five times more than the speed of the fastest spacecraft “New Horizons”.

Such a high speed coupled with an incredibly elongated orbit and a large inclination to the plane of rotation of most of the celestial bodies of the Solar System led astronomers to the idea that Oumuamua has an extrasolar origin. Originally found him in the pictures of the night sky, scientists from the Hawaiian observatory took a dull object for a comet – too extended his orbit. However, further observations, including with the use of more sophisticated equipment, showed the absence of a cometary cloud of dust and gas.

Scientists from the Astronomical Community of BFU them. I. Kant modeled the trajectory of Oumuamua passage near the Sun. The video shows how the “dive” asteroid passes next to our luminary, flying before it by the Earth.

As a result of the analysis of the trajectory and speed of the object, it is shown that the object arrived in the solar system from somewhere in the stellar association of the constellation Kiel, spending about 45 million years on this path. By the way, the asteroid owes its unusual name to its pioneers – from Hawaiian “oumuamua” translates as “envoy”. As the first object that came from outside the solar system, he was given a unique index 1I / 2017 U1, where 1I stands for “Interstellar”, that is, “interstellar”.

“So far, scientists have not come to a consensus on how a small asteroid escaped beyond the limits of the gravitational field of its star and set off on an interstellar journey. It is possible that some cataclysm threw Oumuamua out of his planetary system many billions of years ago, and since He travels through the Galaxy, maneuvering from a particular star from time to time, but if the distant past of Oumuamua is covered in darkness, his present and future can be calculated relatively simply, which we show on the video, “says Alex She was Baigashov, the head of the Astro Society of the Baltic Federal University named after I. Kant.

28.05.2020 laikas 22:10 CDC Warns Public About ‘Cannibal Rats’ Amid Lockdown
Rats are becoming unusually aggressive and have begun eating each other in America, according to scientists at the Centers for Disease Control and Prevention (CDC).