BLM Tells America: ‘We’re Telling You What Will Happen, With Your Permission or NOT’ 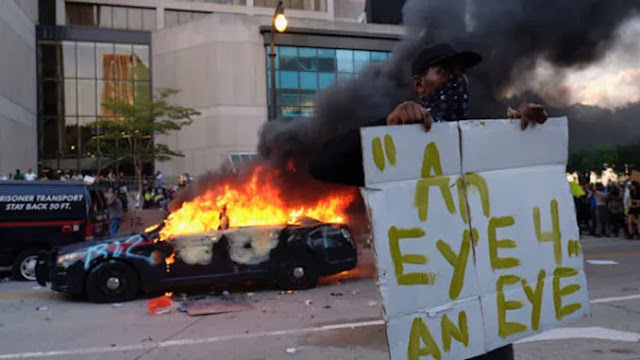 A Black Lives Matter representative at a Chicago rally has warned that the radical group’s demands will be met, “with your permission or not.”

The BLM thug issued the threat last week, warning that “we’re telling you what will happen.”

The ominous threat was issued by Taylor Norwood, who noted that there would be severe repercussions for those who refuse to comply with the “demands” of the organization.

During the press conference, Norwood repeatedly slammed Chicago’s Democrat Mayor Lori Lightfoot for “not protecting the black women in this city.”

She also complained that Lightfoot was robbing Black Lives Matter activists “of their right to vote.”

“This is our city, our city, and we’re taking that s**t back,” Norwood blasted.

“We have demands, and they need to be met, and I feel like I’ve been saying this too much—we’re not asking you anything.“

“We’re telling you what’s about to happen, with your permission or not.”

“You can listen to us or you can get ran over,” Norwood warned as she ended her speech.

.#BlackLivesMatter activist in Chicago: “We have demands and they need to be met … we’re not asking you anything. We’re telling you what’s about to happen with your permission or not. … You can listen to us or you can get ran over.” pic.twitter.com/yEXFT4LOv9

Dailywire.com reports: Another activist bemoaned the fact that people cared about businesses being looted and destroyed during riots.

“People are worried about looting, and there are literal lives being taken away?” the activist said. “There are people who are dying, and y’all are mad about people looting Mag Mile? Get over it! These buildings are insured.”

“Materials will come back, but we will not come back if they kill us!” the activist continued. “What do y’all not get about that? Gucci, Apple store, whatever it is—that stuff will be replaced, but we won’t be replaced. We lose our lives, people lose our lives every single day for this cause, and y’all are mad about the wrong s**t!”

Schaffer tweeted out numerous other videos from Saturday’s protest in Chicago, including videos of the activist beating pig piñatas dressed as police officers.

In front of riot police