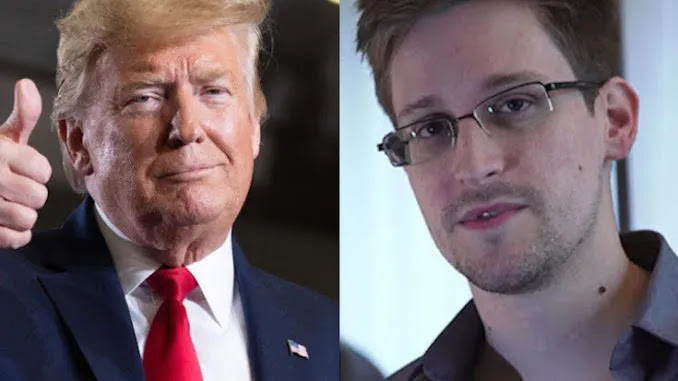 “I’m going to take a look at that very strongly,” Trump told reporters at his golf resort in Bedminster, New Jersey.

Snowden, a former NSA contractor, has been living in exile in Moscow since fleeing the U.S. six years ago after leaking information about the Deep State.

His revelations triggered Democrats and Neoconservatives, who labelled the whistleblower a “traitor” to the United States.

Trump revealed on Saturday that he is “not that aware of the Snowden situation,” but acknowledged that people on both the left and the right are divided over Snowden’s actions.

“It seems to be a split decision,” POTUS said.

Trump first brought up the issue in an interview with the New York Post earlier this week, saying that Snowden’s harsh treatment might be unfair and hinted that it might be political in nature.

“There are a lot of people that think that he is not being treated fairly. I mean, I hear that,” Trump told the newspaper.

USA Today reports: The Post reported that Trump polled members of his staff about whether to let Snowden return to the U.S. from Russia without going to prison.

In the interview, Trump justified talk of a pardon by again complaining about an FBI investigation into links between his campaign and Russians who sought to interfere in the 2016 presidential election. He said it was unfair that people like ex-FBI Director James Comey are free while Snowden is in legal limbo.

“The last time we heard a White House considering a pardon was 2016, when the very same Attorney General who once charged me conceded that, on balance, my work in exposing the NSA’s unconstitutional system of mass surveillance had been ‘a public service.'”

In late 2016, then-President Barack Obama said he wouldn’t consider a pardon until Snowden stopped running from the law.