‘Contact Tracing’ Group Funded By Soros and Gates, With Chelsea Clinton on Board, Wins Gov’t Contract 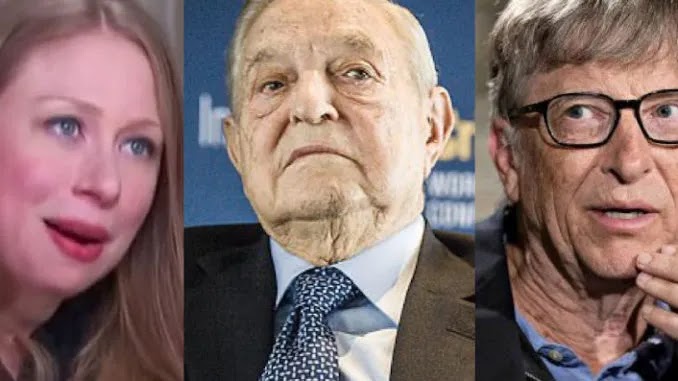 Massachusetts Republican Gov. Charlie Baker has chosen a group called ‘Partners In Health’ to conduct Coronavirus “contact tracing,” a process that involves teams of investigators finding out who infected people have come into contact with.

Disturbingly, Partners In Health is funded by George Soros Open Foundations and the Bill and Melinda Gates Foundation, and has Chelsea Clinton on its board.

The group is already “training and deploying hundreds of contact tracers.”

Some citizens fear the potential for mass surveillance posed by contact tracing, especially in light of a Democrat-introduced bill in Congress to authorize contact tracing “at individuals’ residences.”

NationalFile report: Partners In Health’s involvement will not assuage many fears, considering the group has received funding from George Soros and Bill Gates organizations and counts Chelsea Clinton on its board of trustees.

Chelsea Clinton serves on Partners in Health’s Board of Trustees, according to its 2019 annual report.

Partners in Health co-founder Paul Farmer’s achievement.org bio notes: “Farmer’s work attracted the support of philanthropists, including George Soros and Bill and Melinda Gates. In 2002, PIH received a $13 million grant from the Global Fund for improvements in the Cange complex. In 2005 the William J. Clinton Foundation funded a Partners in Health AIDS program in Rwanda.”

Farmer and Chelsea Clinton did a Clinton Foundation podcast together in 2019.

In response to a 2007 tuberculosis outbreak in Africa, NBC News reported: “Soros’ Open Society Institute announced a $3 million grant to the non-profit organization Partners in Health and Brigham and Women’s Hospital in Boston. The donation will be used to design a model project of community-based XDR-TB treatment in Lesotho. Once treatment guidelines are developed, experts hope the program will be adopted in other poor countries.”

Soros personally announced the grant and said he hoped it would spark a larger project. For this initiative, Partners In Health was cited by name in the propaganda book The Philanthropy of George Soros: Building Open Societies.

In 2011, International Women’s Health Coalition noted, “YP Foundation Founder to Join Paul Farmer, George Soros, at IWHC Gala.” Farmer was honored at the gala, which Guest of a Guest noted had David Rockefeller in attendance.

In 2014, Partners In Health co-founder Paul Farmer secured multi-million dollar Soros financing for a coalition project in Africa. Farmer was featured in an October 2014 video interview on Soros’ Open Society Foundations website, which stated, “In between trips to Liberia, Paul Farmer of Partners In Health visited Open Society’s offices to discuss his work on Ebola. Paul talked about the need to ensure sustainable health systems for people in nations where the virus has spread.” Farmer blasted “fear and conspiracy theories around fatal illnesses” in the video and talked about how to “attack” conspiracy theories with activism.

Prospective Coronavirus contact tracers in New York City are required to understand “institutional and structural racism” and to support immigrants and the LGBTQ community. The government is employing contact tracers to investigate who infected persons come into contact with, leading to civilian concerns that privacy is being attacked.

A job posting on Columbia University School of General Studies states: “The Fund for Public Health in New York City (FPHNYC), in partnership with the New York City Department of Health and Mental Hygiene (DOHMH), is seeking contact tracers to perform case interviews and contact tracing to support the citywide COVID-19 response. using a trauma-informed, culturally respectful approach that builds trust and facilitates the free sharing of information.” The job includes “Conducting in-person investigations into congregate settings and selected cases and contacts.”

Listed requirements include: “Ability to understand the concepts of institutional and structural racism and bias and their impact on underserved and underrepresented communities” and “Have a demonstrated commitment to supporting communities who have experienced systemic oppression and bias (e.g. people of color, LGBTQ people, immigrants, justice involved persons, etc.)”