Cop Gropes Unarmed Woman, Fellow Cops Beat the Hell Out of Her For Pulling Away 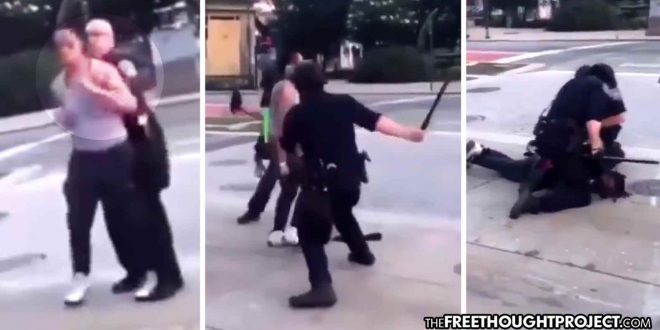 Indianapolis, IN — As the echo chamber from the police apologist crowd ramps up their anti-protest propaganda, it is getting harder for them deny the rampant violence carried out against non-violent peaceful protesters. No one here is claiming that criminals aren’t exploiting these protests for political and personal gain by looting and destroying things. However, all the stories on which TFTP has reported so far involves unprovoked violence on innocent, peaceful protesters. The video below appears to fall in line with this theme.

It is important to point out that many of the arrests we are seeing involve violations of unconstitutional curfews which have been enforced across the nation. When citizens refuse to be silenced and do not go home when told they have to, police begin a process known as kettling.

For those who may be unaware, kettling is a police tactic for controlling large crowds during demonstrations or protests. It involves the formation of large cordons of police officers who then move to contain a crowd within a limited area. Protesters are left only one choice of exit controlled by the police – or are completely prevented from leaving — with the effect of denying the protesters access to food, water and toilet facilities for a time period determined by the police forces.

Essentially, people who stay out past the curfew are being kettled by cops who do not allow them to leave and then are tear gassed, pepper sprayed, beaten with batons, and then arrested.

This tactic is highly controversial because multiple instances have captured cops abusing people who are innocent, including the press, and bystanders who are not even participating in the protests.

If you think staying out past curfew is somehow wrong, think back to a few weeks ago with the right wing was doing the same thing to demonstrate against the unconstitutional lockdowns. If you did not think it was wrong then, but you do now, you need to do some soul searching and you should read the constitution a little more. There is no difference in these two protest groups, except for the agitators who are clearly not part of the peaceful protest groups.

Nevertheless, those who stay out past curfew have found themselves subject to horrifying treatment up to and including being shot in the face with rubber bullets and tear gas grenades.

In the following video, we see a woman who is about to be taken into custody: for what, we do not know, but it is likely as simple as staying out past curfew or “contempt of cop.” However, as the cops attempt to take her in, one of them appears to grab her near her breasts, causing her to break away. According to the OP:

From this view you can see the cop grope the woman he’s restraining, that’s why she breaks away Then of course a half dozen cops beat her for not wanting to be groped

Sure enough, as the woman gets free, a half dozen cops surround her and begin pummeling her with their batons, before slamming her into the concrete and jumping on top of her.

When a bystander — another woman — attempts to tell them to calm down, she is shoved to the ground as well as another half-dozen cops pile on top of her.

Twitter user Bob Holley tweeted the video out with the following caption, which sums up the situation quite accurately.

“If this doesn’t make you want to just scream there is something dead in your soul.”

We agree. The time is now to start talking about the solutions that can bring about the radical change needed in American law enforcement.

If this doesn’t make you want to just scream there is something dead in your soul. #PoliceBrutality https://t.co/XeobHLhlwn