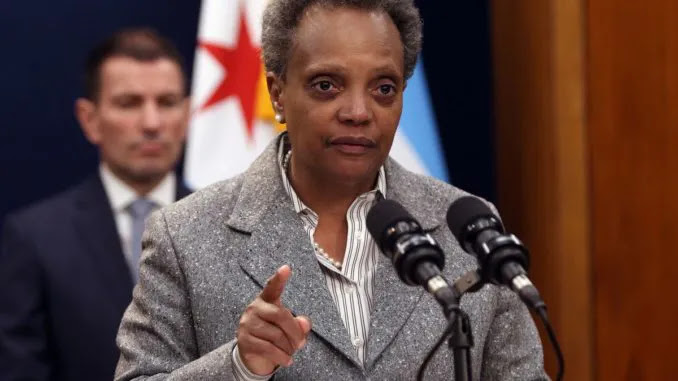 Italian Americans reacted with anger over the removal of Columbus statues from Chicago.

Two statues of Christopher Columbus in Chicago were removed under the cover of darkness early on Friday morning under the orders of Chicago Mayor Lori Lightfoot.

The Mail Online reports: Before dawn, city crews used cranes to remove a monument in Chicago’s Little Italy and a massive bronze statue in Grant Park, which were first erected at the city’s first and second World’s Fairs in 1893 and 1933, respectively.

Italian American community leaders say they were taken aback by Lightfoot’s abrupt order to remove the statues, which Lightfoot calls a ‘temporary’ measure until passions cool. The Grant Park statue was at the center of violent scenes last week, when 49 police officers were injured by a mob hurling rocks and fireworks while attempting to tear the statue down.

While the protesters decried the statue as a symbol of oppression, many Italian Americans see Columbus as a figure of ethnic pride, and of Italian contributions to American history.

Chicago Alderman Anthony Napolitano told the Sun-Times that he’s very saddened by the removals, and he questioned why they were carried out under the cover of darkness. He dubbed it ‘not the American way.’

‘It’s because a bunch of people, a bunch of socialist cancel culture people cried about it that we removed it in the middle of the night,’ Napolitano said. ‘In America, we do this by discussion.’

Napolitano, a former Chicago police officer and fire fighter, is the son of a mother arrived from Italy when she was 9, and a father who is a second generation Italian immigrant.

‘The Italian American community feels betrayed. The Mayor’s office is giving into a vocal and destructive minority. This is not how the democratic process is supposed to work,’ he said.

‘Are we giving in to the violence of the left at this point?’ JCCIA President Sergio Giangrande asked the Chicago Sun Times. ‘This was a decision made without us. We were not at the table to discuss what other options there were.’

‘Are we happy about it? Absolutely not. As a community, we are extremely hurt,’ said Giangrande.

Many statues of Columbus, such as the ones removed in Chicago, were erected at a time when Italian immigrants often faced harsh discrimination and even ethnic violence, including one of the largest single mass lynchings in American history when 11 were murdered in 1891 in New Orleans.

Columbus Day was first declared a national holiday the following year, the 400th anniversary of Columbus’ first voyage, in part as an effort to soothe tensions with Italian Americans following the lynching.

Others in Chicago have taken Lightfoot’s side in the statue debate, and some are pushing for even more extreme action. Five of Chicago’s left-wing alderman issued a statement on Friday calling the Columbus statues ‘monuments to white supremacy,’ and vowed to fight for their permanent removal.