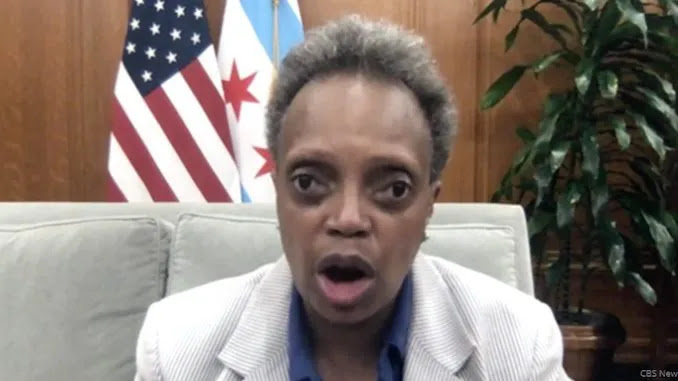 Far-left Chicago Mayor Lori Lightfoot has threatened to sue the Trump administration if federal agents “step out of line” following Trump’s announcement that he is deploying law enforcements officials to help keep the crime-plagued city safe.

“I’m calling on all Chicagoans that if you see something that doesn’t like right, please, don’t hesitate to report it,” Lightfoot said during a Wednesday press conference.

“We are going to remain diligent, and if we see any steps out of line, particularly with DHS or Border Patrol, we are not going to hesitate to take the president to court and stop any unconstitutional actions.”

Breitbart.com reports: When pressed on whether she supports the deployment of agents to Chicago, the mayor replied: “The proof is gonna be in the pudding. It’s too soon to be able to say if this is a value-add or not. We’ve got to see what actually materializes.”

In a news conference in the East Room of the White House, President Trump said he would expand the Justice Department program known as Operation Legend, sending officers from the FBI, U.S. Marshals Service, Drug Enforcement Administration, and Bureau of Alcohol, Tobacco, Firearms and Explosives to the cities.

“Today I am announcing a surge of federal law enforcement into American communities plagued by violent crime,” Trump said.

Wednesday’s announcement comes after more than a dozen people were injured in a shooting at a funeral in Chicago on Tuesday night.

Trump on Wednesday said he had “no choice but to get involved” by sending federal officers to the cities.

On Tuesday, Lightfoot tweeted that she would push back against efforts to send federal officers to the city.