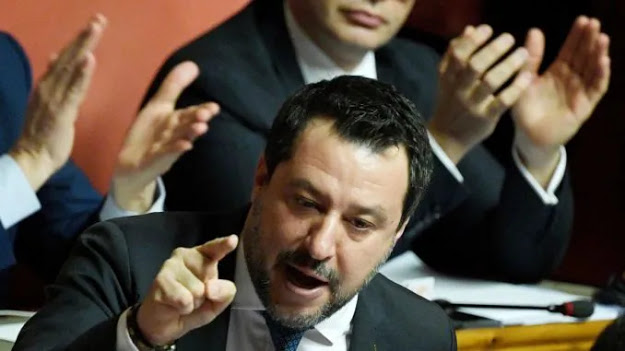 Former Deputy Prime Minister of Italy Matteo Salvini has denounced the three month extension of the country’s state of emergency over the coronavirus.

Salvini, who is now leader of Italy’s populist Lega party, suggested that the decision was made for “political purposes.”

Breitbart reports: On Tuesday, Salvini added that he has asked Italy’s mayors and governors “to reopen everything possible, resisting those who would prefer an Italy without fairs, festivals, and markets to have only co-ops and multinationals to impose prices and products.”

“We buy Italian, we help our people: we are with you!” he said.

Salvini also criticized the hypocrisy of those who apply a double standard regarding the enforcement of health directives, noting that Italians can receive a fine of up to a thousand euros for failure to wear a face mask, whereas international migrants are arriving into Italy without so much as a test to see whether they carry the virus.

“Kids are harassed, coffee bars closed, old people chased down as dangerous criminals, soldiers in Ventimiglia checking those on the beach, and in the meantime thousands and thousands of immigrants land and then run away and go wherever they want,” he said.

Yesterday, celebrated tenor Andrea Bocelli said he had called Mr. Salvini as well as other politicians to complain of Italy’s disproportionate response to the coronavirus epidemic and to plead for the formation of a non-partisan united front to stand up to those who would impose unreasonable limitations on personal freedoms.

Speaking in the Italian Senate in Rome, Mr. Bocelli said that the lockdown measures made him feel “humiliated and offended by being deprived of the freedom to leave my house, despite having committed no crime.”

The new positive cases of coronavirus in Italy have slowed to a trickle, and the number of patients in intensive care units has dropped to just 42 in the entire country, while daily deaths with coronavirus are in single digits. One of the nation’s top epidemiologists has asserted that most new cases are asymptomatic and the viral load in new patients is a fraction of what it was months ago.