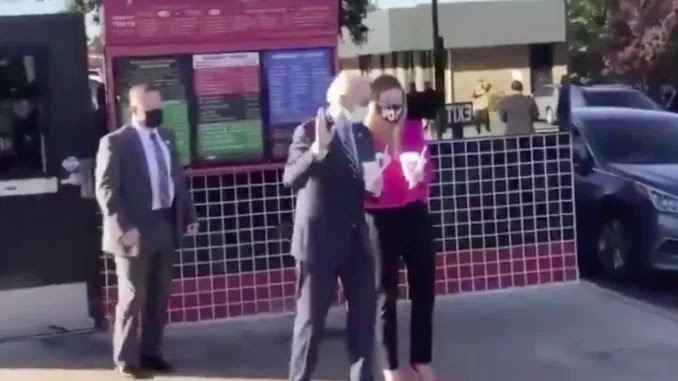 Democrat presidential nominee Joe Biden stormed away from a press briefing after a reporter asked him about allegations surrounding his son Hunter’s foreign business dealings and revelations the FBI seized his laptop last year via subpoena.

The Biden campaign later called a lid on campaign events until after Thursday’s presidential debate, with Biden now back at his Wilmington, Delaware home.

Either Joe Biden is running scared as the Hunter Biden laptop scandal continues to threaten to derail his candidacy, or he’s doing a very good impersonation of a man who is.

Biden, who has long tried to avoid talking about his son’s overseas business deals, was asked about the story during a campaign stop in North Carolina on Sunday. The reporter asked Biden if he had any comment about revelations that the FBI had seized his son Hunter’s laptop last year via subpoena.

Video of the Biden encounter, which was shared on social media by President Trump’s reelection campaign, showed Biden refused to even listen to the reporter’s question, and left the scene with a dismissive wave as soon as the reporter said the word “FBI.”

The laptop contained emails about the Biden family receiving money from China and other foreign sources. https://t.co/EoGvdS7eUt pic.twitter.com/VCtocB3Br8

Breitbart report: Earlier this week the Post reported that it had obtained emails from a laptop that allegedly belonged to Hunter Biden. The laptop was supposedly dropped off by Hunter at a local computer repair shop in Delaware in April 2019 after being subject to water damage. When no one returned to pick it up, a technician at the shop claims to have gone through the hard drive sometime in the summer of 2019 and proceeded to share it with former New York City Mayor Rudy Giuliani.

FBI investigators seized the laptop in December of last year as part of an ongoing investigation into foreign election interference. It remains unclear if the laptop, and its corresponding content, is authentic.

On Wednesday, one of the emails published by the Post, in particular, stirred national attention. The email, purportedly exchanged between Hunter and an executive with the Ukrainian-based natural gas conglomerate Burisma Holdings, alleges that a meeting took place between the former vice president and a representative of the company in 2015.

The meeting supposedly took place nearly a year after Hunter had joined Burisma’s board of directors. At the time, Burisma was facing heavy pressure from both the Ukrainian government and U.S. diplomatic officials over allegations of corruption. Adding to the potential perception of a conflict of interest, provided the meeting did take place, is that at the time the former vice president was the Obama administration’s point man on Ukraine.

Since the Post’s exposé, the former vice president, himself, has refused to comment on the matter. Biden has stuck to that strategy even as his campaign has suggested that although no official meeting with the Burisma representative may have taken place, it may have occurred in an unofficial capacity.

“Biden’s campaign would not rule out the possibility that the former VP had some kind of informal interaction with [the representative] which wouldn’t appear on Biden’s official schedule,” Politico reported this week.

During their occupation of the White House, Barack Obama and Joe Biden gave the green light to a Chinese Communist Party (CCP)-linked corporation to establish a presence in the United States where it is now trying to peddle Wuhan coronavirus (COVID-19) testing kits on Americans.

01.12.2020 laikas 23:05 Skeptical of voter fraud in 2020? Here’s your evidence.
Has anyone ever told you that “You can’t do it” and “You’re crazy” over and over? Perhaps they’ve told you this so many times, you’ve started to believe it yourself. This is what’s happening in our election today....