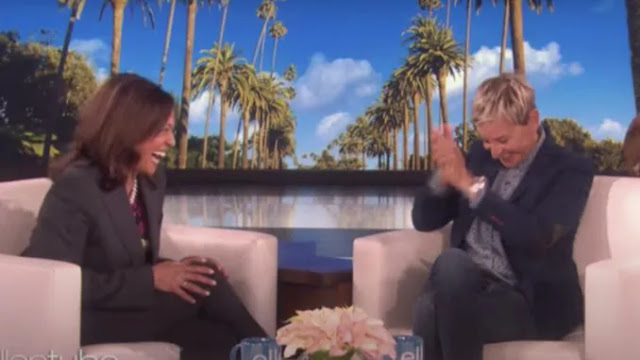 Sen. Kamala Harris (D-CA), the presumptive Democrat VP nominee, made waves following an appearance on Ellen where she laughed hysterically with host Ellen DeGeneres after joking about murdering President Trump.

At the time of the appearance, April 2018, Harris remained tight-lipped about her presidential aspirations but answered a series of questions about her first celebrity crush, nicknames, and what she does at night when she can’t sleep. Then Ellen asked, “If you had to be stuck in an elevator with either President Trump, Mike Pence, or Jeff Sessions, who would it be?”

Harris looked away then responded, “Does one of us have to come out alive?” laughing hysterically and at length at her own answer. Ellen also laughed and put down her questions to clap her hands:

Breitbart report: Harris previewed her appearance on the show, posting a photo of herself with an Ellenmug and telling her followers that she had a “great time”:

Some had pondered if the joke would have been so cheerfully received had a Republican said the same of a Democrat president:

TAIP PAT SKAITYKITE:
30.09.2020 laikas 10:35 The terrible catastrophe that killed the ancient Maya is named
Scientists from the Spanish National Research Council concluded that 1590 years ago, the ancient Mayan civilization was partially affected by the catastrophic eruption of the Ilopango volcano, which killed all life within a radius of 40 kilometers....

Biologists have discovered that the mycovirus can turn deadly rape-pathogenic fungi into beneficial symbionts.