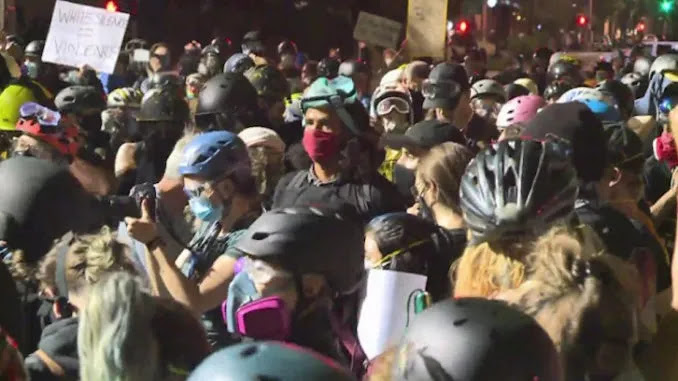 Protesters from Portland decided to invade the quiet suburbs of Springfield, Oregon last night, threatening to beat up civilians and rape their wives and daughters.

As usual, the protesters started a fight with police, before roaming the neighborhood, insulting residents and making vile threats.

Video footage of the “protest” shows Black Lives Matter and Antifa protesters threatening police and everyday Americans who made the mistake of coming out of their homes to see what the commotion was about.

This happened tonight in Springfield, OR. Antifa & BLM rioters invaded a neighborhood and pissed off the residents. Protesters ended up running to the police before quickly heading back to Portland. They threatened to be back #AntifaDomesticTerrorists #BlackLivesMatter pic.twitter.com/1o98ypwZof

Towards the end of the video footage, a group of patriots can be seen telling the rioters it’s time to leave Springfield and head back to Portland.

At this point, many rioters expressed concerns for their safety, attempting to report the residents to the police for “verbally assaulting” them.

Meanwhile the protest leader continued to threaten the suburban residents, promising they’d be back.

Meanwhile in Arizona, the patriotic residents of Colorado City put major American cities including Portland and Seattle to shame, running Antifa and Black Lives Matter protesters out of town as soon as they showed their faces and threatened to cause a scene.

“Keep moving! Get outta here!” came voices from the crowd of residents, as the out-of-town radical leftists were told they are not welcome in Colorado City and ejected from the community as soon as they arrived.

“And pick up your trash!“

Colorado City is a town in the beautiful Mohave County, Arizona, in a region known as the Arizona Strip. According to the 2010 census, the population of the town is just 4,821, yet these few thousand patriots banded together and dealt with the threat of leftist terror far better than many cities including Seattle and Portland.

Many people on social media are deeply impressed with the actions of the Colorado City residents, with some expressing the desire to live in a small, patriotic community.

“Way to go Colorado! It would be nice living in this kind of neighborhood!” said Verlygene Haverof.

“Those horses were so calm and in the zone. Unphased. My anxiety was rising just watching this but they were so relaxed. Impressive. Also, wow to Colorado city!” said Becky White Stocker.

Erica Elsman Costello added “We are prepared to stand with law enforcement and do the same for our community. This is what America winning looks like. Great teamwork Colorado City!“

Elaine Dinwiddie Moore was also impressed, saying “Excellent! Now maybe all the other cities and towns will take notice!”

“The time has come for Americans to step up and stop this craziness! Good for them,” said Tonya Monks-D’Amico.

“The time has come to play Cowboy’s and commie’s,” said Todd Halt.

Meanwhile, in large Democrat-run cities across America, radical leftists including Antifa and Black Lives Matter protesters are being coddled and encouraged by indulgent leftist mayors and city councils, as violent riots continue to spread like wildfire.