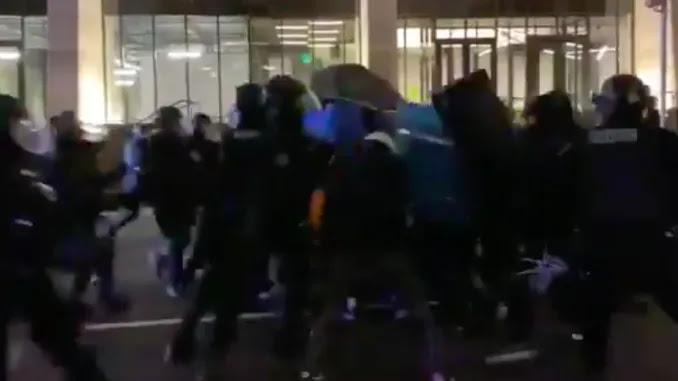 No matter how many Antifa/BLM riot videos you have seen in the past few months, you haven’t seen anything like this one.

After 93 consecutive nights of rioting in the Democrat-run city, the Portland police are understandably fed up with these far-left anarchists and rioters — just like the rest of the country.

So it shouldn’t come as a surprise that the cops have decided to change their tactics and made minced-meat of one group of far-left militants who formed a “line” in the street, with their make-shift shields.

As the Marxists stood there, taunting the police and refusing to obey orders to move, the cops did something nobody was not expecting. They started running full-force at the group “Brave Heart” style and proceeded to beat the living sh*t out of them.

You can watch the video here:

Unless you have experience in a war zone, you won’t be able to imagine how difficult it must be for these police officers to face this night after night after night in Portland as leftist militants wage war on American society.

Don’t forget, this is the 93rd consecutive day of rioting.

Just last night, an Trump supporter named Jay Bishop was hunted down by Antifa and murdered in the streets in cold blood.

In Baltimore on Sunday a white man in the street was attacked from behind with a brick. A shocking video of the horrific and senseless attack was posted on the internet by a Black Lives Matter supporter with the caption “White lives don’t matter.”

In a video posted to Instagram, a black man attacked an unsuspecting white man with a brick. I bring up their skin colors because it was posted with a hashtag that reads "WhiteLivesDoNotMatter." https://t.co/9DJeT95tRd pic.twitter.com/0OooUTGyeM

If Joe Biden gets anywhere near the White House, these radicals will be so emboldened by their success, not to mention the lack of consequences for their actions, they will really start wreaking havoc on America.