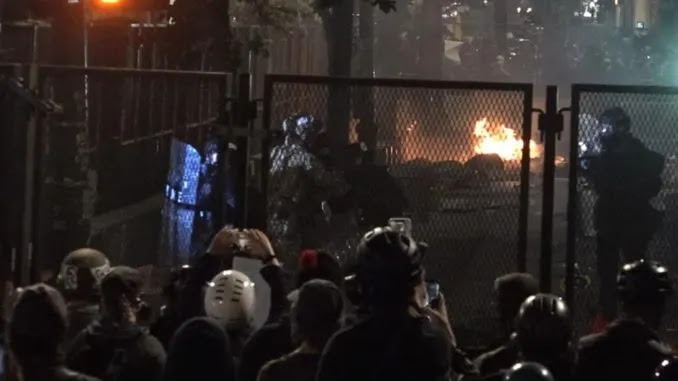 President Trump said he would send National Guard to Portland if the violent protests continue.

He said that federal officers who were stationed at the courthouse in downtown Portland will remain in the city through at least Friday to see if Gov. Kate Brown and Mayor Ted Wheeler could clear out the protesters.

He said if they were unable to disperse what he called the “beehive of terrorists” he would send in the National Guard.

RT reports: Trump warned of a National Guard deployment during a Thursday press conference, one day after the Department of Homeland Security (DHS) struck a deal with Oregon Governor Kate Brown to phase out federal police stationed in Portland, where they’ve worked with local authorities to defend a federal courthouse and other government property. Though the withdrawal was set to begin on Thursday, the president said National Guard troops would effectively replace the federal agents should the unrest continue.

“Our people are staying there to see whether they can do it today and tomorrow, and if they don’t do it we will send in the National Guard, and we’ll take care of it,” Trump said, labeling the protesters “professional anarchists” and “people who hate our country.”

“We’re telling them right now, that we’re coming in very soon, the National Guard… So [federal agencies are] working today and probably tomorrow to clean out this beehive of terrorists.“

“These are people that hate our country.”

Trump says if local law enforcement in Portland doesn’t disperse “this beehive of terrorists," he will send in the National Guard pic.twitter.com/DHjLiR019T

As part of the federal withdrawal deal, Portland law enforcement cleared out two large protester encampments set up in city parks on Thursday morning, as the spaces are located near federal properties that have been under siege by demonstrators for more than two months, including the courthouse. The protests have frequently become violent, seeing regular clashes between activists and police, with some demonstrators arming themselves with improvised weapons and smallexplosives. Police have also come under fire for heavy-handed tactics, with federal agents accused of wielding excessive force and “kidnapping” protesters off the street, using unmarked vehicles.

Despite the agreement, DHS chief Chad Wolf said the withdrawal would only proceed once the agency is confident federal properties will be secure, leaving some question as to when the de-escalation will actually take place. Wolf noted that “we anticipate the ability to change our force posture” in Portland once conditions on the ground “significantly improve.”

Federal agents were deployed to Portland earlier this month as part of a new multi-agency task force created by executive order in June, which aims to protect statues, historical monuments and other federal buildings. Such government properties have become common targets for anti-police brutality activists in recent months, amid a wave of mass protests sparked by the police killing of George Floyd in May.