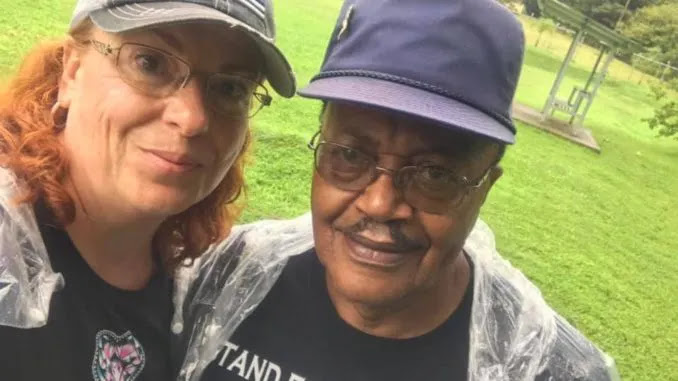 As Democrats lose ground on the issue of lawlessness, Ann Marie Dorn, who is a serving sergeant at the police department, said President Trump is bolstering law enforcement agencies and using federal resources to “restore order in our communities.”

She also said that she relives the ‘horror’ of her husband’s death every day.

The Mail Online reports: In detail, she described the night that 77-year-old David Dorn was fatally shot outside a pawn shop June 2 amid violence following the death of George Floyd

Saying ‘violence and destruction are not legitimate forms of protest,’ Dorn said she hopes that her pain will ‘help shake this country from the nightmare we are witnessing in our cities and bring about positive, peaceful change.’

‘How did we get to this point where so many young people are callous and indifferent towards human life?’ Ann Marie Dorn asked.

‘This isn’t a video game where you can commit mayhem and then hit ‘reset’ and bring all the characters back to life. David is never, never coming back to me.

‘He was murdered by people who didn’t know, and just didn’t care. He would have done anything to help them.’

David was gunned down while trying to protect a friend’s pawn shop from looters in St Louis on the morning of 2 June. Surveillance footage captured his last moments. His body was found on the sidewalk at around 2.30am that morning.

David, who was Black, was a friend of the pawn shop owner and often checked on the business when alarms went off.

Soon after the shooting, Trump wrote on Twitter David was ‘viciously shot and killed by despicable looters last night. We honor our police officers, perhaps more than ever before.’

Two men have been charged in David’s death.

Ann-Marie earlier declined an interview request but Ken Farnaso, deputy national press secretary for President Donald Trump’s reelection campaign, said she ‘will speak directly to the horrible pain caused by Democrats’ policies’ and laud Trump for standing up for public safety. Trump has made law and order a focal point of his bid for a second term.

‘Ms. Dorn’s painful story is just one of the countless stories that the media glosses over, and we are honored she will be sharing it with the rest of the nation at tonight’s RNC,’ Farnaso said.