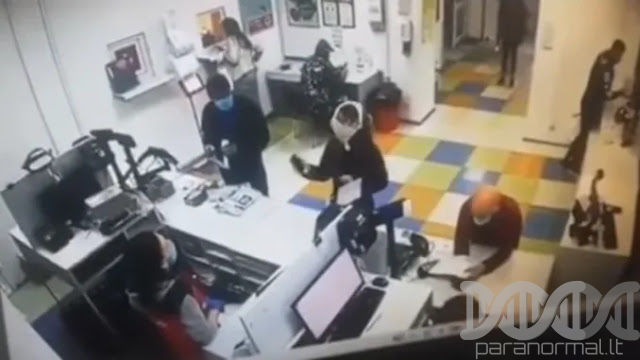 A woman who was told she would not be served by staff unless she was wearing a face mask found a novel way around restrictive new Ukrainian laws.

To ‘comply’ with the new rules, the woman decided to whip off her panties- in front of queuing customers- and wear them on her face instead.

The footage shows a woman without a protective face mask – which are now mandatory across the country – as she speaks with an office clerk. Confronted about having no face covering, the woman unexpectedly snapped, brusquely peeling off her pants and underwear right in front of the post workers and bewildered customers waiting in line.

She then placed the undergarments on her head – maskwise – before putting her trousers back on as if nothing happened. The DIY ‘face mask’ apparently checked out with the employees, who continued business as normal and eventually serviced the woman.

The bizarre stunt was confirmed by the post service to local media, and somewhat surprisingly, the company seemed quite understanding about the incident, saying it “by no means condemns the behavior of the client” and that it won’t report her to the police. The New Post said the woman was offered a free face mask when she entered the office, yet she refused to use it, sticking to a more familiar piece of cloth instead.

The only person to land in hot water over the incident is the employee who leaked the scandalous security footage, as the company deemed it a breach of its “information security” policies. The New Post is currently considering dismissal for the cheeky worker.