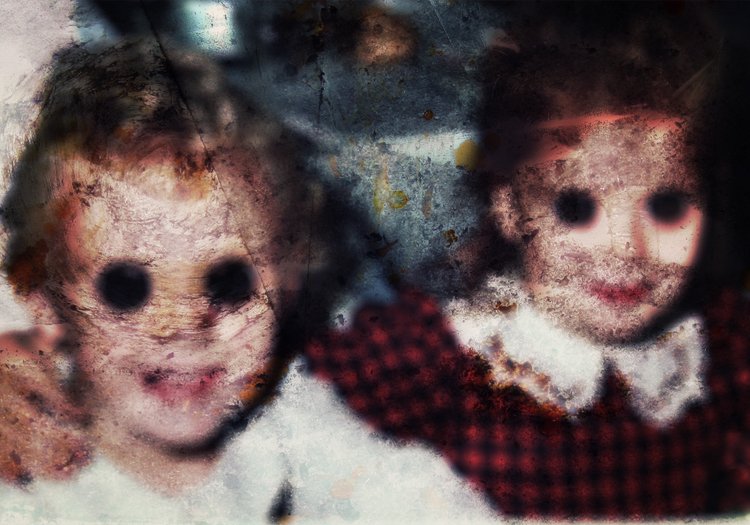 It’s common knowledge that kids are prone to having very active imaginations. In between playing make-believe with the neighbor kids and asking their parents inquisitive (and usually embarrassing) questions in public, kids are known to develop an imaginary friend to entertain them on rainy afternoons.

But like having active imaginations, kids are also more susceptible and open to seeing ghosts than most adults are. And what happens if your child thinks their new “imaginary” friend is, in fact, a ghost?

The Girl in the Closet

“When my daughter was three she had an imaginary friend named Kelly who lived in her closet. Kelly sat in a little rocking chair while she slept, played with her, etc. Typical imaginary friend shit.

Anyway, fast forward two years, the wife and I are watching the new Amityville (the one with Ryan Reynolds) and our daughter walks out right when dead girl goes all black eyed. Far from being disturbed she said ‘That looks like Kelly.’ ‘Kelly who?’ we say ‘You know the dead girl that lived in my closet.’” – Original thread

The Man in the Dresser

“When I was younger, I had an imaginary friend who lived in this massive antique dresser. We’d chill out, and I vividly remember him telling me stories, although I have no recollection of what they actually were.

I remember one day talking to my parents about it, and when I started telling him about my dresser buddy, he wanted to know his name. It was something innocent like Peter or Patrick, but I can still see him going white in the face.

I drew Peter/Patrick out for him, and the very next day him and my uncle took out that dresser and burned it. It wasn’t until a few years later when I found out my Dad’s little brother (my uncle) also had the same friend with the same name who lived in the same antique dresser.

After a few months of the typical imaginary friend shit, my uncle started having night terrors and couldn’t sleep because of Peter/Patrick. It got so bad that they had to move him out of his room before he managed to get back to normal.” – Original thread

The Lady in the Wall

“When my son was about 3, he had an imaginary friend in his room who he used to talk to all the time. He would tell us stories about things she would tell him, and we’d hear him chatting to her at bed time. We thought it was pretty cute.

After a few months, my son said he wasn’t friends with her anymore. We figured he was over his phase of ‘seeing’ her, so were surprised to hear him still talking to her at night. Then he started not wanting to go to bed and having really bad dreams.

At some point, we ended up asking a lot of questions about her. We had assumed she was a little girl, but apparently she was 47. She lived in the wall and he stopped being friends with her because she wanted him to call her mummy (her name was something like Margaret). She wanted him to come and live in the wall with her.

He had told her he didn’t want to talk to her anymore and she wouldn’t go away. We eventually moved, and he stopped talking about her.” – Original thread

“I used to break into houses as a little kid. I lived in a really run-down part of town with a huge amount of foreclosed and empty houses. So, I would pry off the window screens and if the windows were unlocked, I would crawl inside them. I was maybe like 5 or 6.

In one abandoned house, there was always this young Hispanic girl hanging out in the upstairs bathroom. I would go up there, and she would talk to me and we’d play tag and hide-and-go seek and truth or dare.

I’d always invite her home for dinner but she said she couldn’t leave because she had to wait for her mom to come home. I guess it made sense to me at the time, but when I think back, there was nothing in that house. Not even silverware in the kitchen drawers.

The carpets were all mildewed and it was seriously empty. I don’t think she could have really been there.” – Original thread

“I have a niece I’m taking care of while her mother is in the hospital. Her father died before she was born, and her mother was diagnosed with cancer. She’s has imaginary friends, which is okay with me. But when they tell her to finish her dinner quickly to play and ask her to stay up all night, it worries me.

She started crying when they were playing because they said they will not be here anymore when she turns six. So a week before her birthday, her ‘friends’ brought her up near this cliff we live by and told her they could be together if she jumped. She refused.

All the while, I was making dinner and when I noticed her gone, I panicked and searched for her everywhere. I found her sitting on the edge of the cliff.

She said, ‘I don’t wanna jump. It’s gonna hurt bad. I get to see mommy if I do? But what about aunt? Can she go?’ This was when I stepped in and picked her up and said we had to go eat dinner. As we left, she was waved bye to the cliff.” – Original thread.