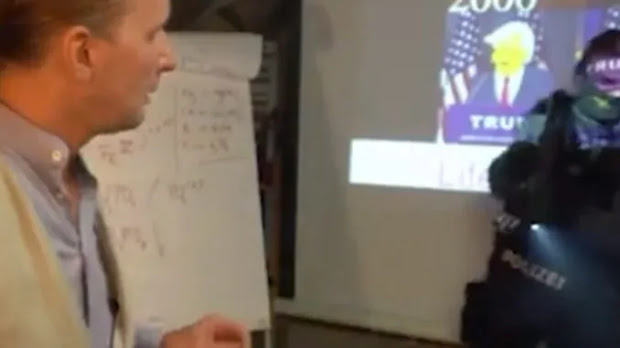 A German doctor known for providing medical assistance to protesters during lockdown protests was arrested in his own home by police who forced their way into his property and forcefully ended a livestream he was broadcasting to his followers.

Dr. Andreas Noack was rumored to be under investigation for not complying with draconian German COVID-19 lockdown laws, but this has not been confirmed and many are speculating there is more to the story.

During the livestream, police can be heard banging on the door at the location where Noack was broadcasting.

Shouting is then heard along with screams of “Polizei!” before armed cops are seen entering and ordering Noack to get on the floor, as he is treated like some kind of violent terrorist.

As Noack is handcuffed, a police officer in a mask then appears to try to shut down the live stream but only succeeds in diverting the camera.

This is happened to doctor Andreas Noack in Germany. After the unconstitutional approval of the infection law, police broke into his house while he was having a live transmission on YouTube. Those who cried against "fascism" have created the most criminal dictatorship in history. pic.twitter.com/fLgl5JTF0i

Commenters were shocked and dismayed by Dr. Noack’s arrest with many comparing the actions of the German government and police to Nazi-era tactics.

“The Nazis didn’t start with dragging people off to concentration camps. That was the conclusion,” said Roger Viggers. “They started by arresting and imprisoning dissenters, trade unionists and others who called their actions in to question.”

“We might have to wait to compare something as dreadful as Nazism to something that is still ongoing and developing, but one thing is for sure: these actions on the part of governments to silence all those influential people whose views differ from mainstream propaganda, are definitely reminiscent of that kind of heinous past. History might repeat itself and we should do our utmost to prevent that from happening again,” said Mar Li.

Others suggested the reason was that Noack had welcomed too many people into his house, violating COVID-19 restrictions on gatherings.

“I think the guy is guilty of expressing his opinions,” said another respondent.

“They’ve turned back the clock to the 1930’s,” remarked another.

Germany has seen numerous massive anti-lockdown protests, including one yesterday in Berlin during which police hit protesters with water cannons.

As we previously highlighted, a pregnant mother in Australia received a home visit and was arrested by police for the crime of helping to organize an anti-lockdown protest on Facebook.