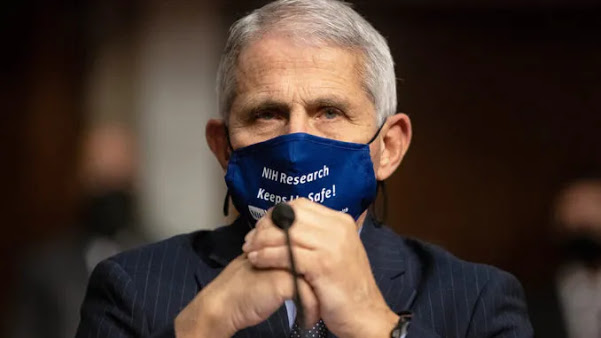 Dr. Fauci, who has insisted on strict public health measures even after people have been vaccinated, claims that the coronavirus will remain a threat, which is why officials must get the “entire world vaccinated.”

Talking to NPR’s Fresh Air, the National Institute of Allergy and Infectious Diseases director emphasized that getting the majority of the population vaccinated remains a key objective in the battle against the virus.

The US disease chief added that at the same time officials must “double down on the public health measures of uniform wearing of masks, physical distancing, avoiding congregate settings…particularly indoors.”

Breitbart reports: But such drastic measures, he said, should also extend globally.

“You’ve got to be able to get — with the help of the developed world — the entire world vaccinated,” he said, according to NPR.

“As we allow this infection to exist to any degree in any part of the world, it will always be a threat. So we’ve got to approach this the way we approach smallpox, the way we approach polio, and the way we approach measles and other devastating global outbreaks,” he continued. Fauci has said that 70-85 percent of the population in the U.S. should be vaccinated before officials begin pulling back public health measures. He also believes that people should still wear masks, even after being vaccinated, telling Fox News’s Dana Perino this week:

And just to be doubly sure, there are a couple of reasons to wear masks even after vaccination. One, you want to protect other people in case you have virus in your nasal fairings, and if you look in the community, there’s enough virus out there that before we start pulling back on things like public health measures, you want the overwhelming population vaccinated. And as I’ve said, the calculation — even though it’s still an estimate — would be somewhere between 70 and 85 percent of the population.

While Fauci has said that there is “no data that indicates” that double-masking works — a clarification he made after seemingly condoning the practice, he told reporters that he often wears two masks himself.

“I say there’s no recommendation. However, there are many people who take the common-sense approach,” he clarified.