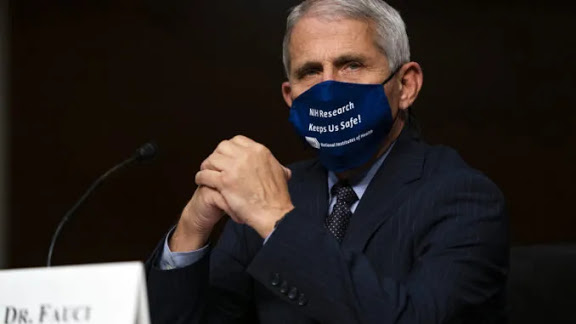 Dr Anthony Fauci has declared that he’s open to an expanded role in the Biden administration.

Fauci, who is one of the most visible members of the government’s pandemic response said “I’m perfectly comfortable with the role that I’m in, but certainly if the president of the United States wants me to do something else, I’d seriously consider it.”

Biden told reporters last week that his team had been in touch with Fauci, and that “he’s been very, very helpful.”

The Independent reports: Mr Fauci, who has lead the National Institute of Allergy and Infectious Diseases since 1984, told McClatchy. “Quite frankly, I don’t anticipate that I’m going to be doing anything other than what I’m doing now. But then again, we have a president-elect who may have other plans. I don’t know.”

Mr Fauci has held the position across six different presidential administration, but his sometimes bleak assessments of the disastrous US coronavirus response put him at odds with the president, who has often blatantly misrepresented the magnitude of the crisis.

At a November Trump rally in Florida, audience members chanted “fire Fauci,” and the president suggested he would can the doctor after the election. The two have had an increasingly distant relationship over the months, with Mr Fauci not being invited to various briefings with the president

The disease expert has reportedly had talks with Ron Klain, president-elect Biden’s chief of staff, and told McClatchy he wasn’t interested in leading the Centers for Disease Control or the department of Health and Human Services. He also said he’d back Mr Biden’s proposed national mask mandate.

“If President-elect Biden decides on a mask mandate, I will be fully supportive of that,” he said. “I do know that there is a considerable amount of pushback for mandates,” Fauci said. “I would certainly be supportive of it.”

He also said he’s confident enough in early, promising evidence from the Pfizer and Moderna coronavirus vaccines that he’d take them himself on camera.

“I’ve seen enough of the data of the Pfizer and Moderna product that I’m really convinced we’re dealing with a safe and effective vaccine,” he said. “I would be more than happy to, in a public arena, just so we have a picture taken, of me getting vaccinated.”