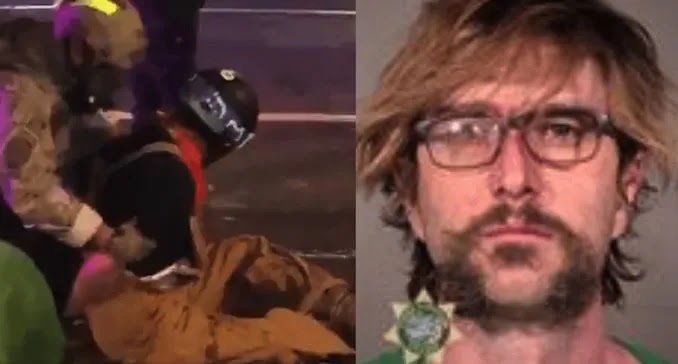 Antifa militant and convicted pedophile Blake David Hampe was arrested Saturday following his alleged stabbing of a black Trump supporter during a riot in Portland.

Blake David Hampe has become the latest in a growing number of Antifa members to be exposed as a convicted pedophile.

In 2008, Hampe was sentenced to serve 41 months in prison and 10 years of supervised release. Court documents state that officers from the U.S. Customs and Border Protection who performed a search of his vehicle discovered “a lot of merchandise for children” including sleeping bags, children’s stickers, children’s underwear, children’s towels with superhero prints, and packages of trading cards—alongside 12-15 condoms, lubricant, a camera, a cellphone, and a laptop.

Hampe, who incriminated himself during the search, stated that he was kicked out of his uncle’s home on account of a discovery of child pornography, and that he had also stored the illicit material on his mother’s home computer, and had received counseling for his “problem.”

But pedophilia isn’t Hampe’s only problem. He’s also an allegedly violent leftist with a taste for blood who stalked a black Trump supporter before stabbing him during a riot.

TPM reports: The Trump supporter and conservative, who goes by the name Black Rebel on social media, posted several updates to his condition from the ambulance and hospital. In the Periscope livestream, he alleged that Hampe had stalked him and his group of friends for several blocks in Portland before stabbing him.

Black Rebel stated that Antifa militants doxed his identity and posted his location on social media and advised each other to “watch out” for him.

“That knife was long enough. He stabbed me to kill me,” said Black Rebel, who says that he spotted Hampe, who was part of a group of Antifa following his group of friends for several blocks before he approached Hampe to ask why he was following them.

“We were all out there, four triends, trying to keep each other safe in the best way possible. I figured I’d try to de-escalate and just have a conversation,” he said. “I went over there, said ‘what’s up buddy?’ and that mother**ker went around and shanked me in the f**king kidney.”

Footage of Hampe’s arrest was captured by several photojournalists, including Garrison Davis, who posted video of the Portland Police Bureau taking him into custody.

This Antifa guy stabbed someone in Portland earlier this morning, prompting a police response and his arrest. pic.twitter.com/b0UBqnXJaX

“The level of disrespect these rioters have for public servants [and] people in general is unmatched,” observed Schaffer.

While police respond to an alleged stabbing situation

A BLM rioters yells at the responding officers, follows him to his vehicle

Then proceeds to kick it after the door closes

The level of disrespect these rioters have for public servants & people in general is unmatched pic.twitter.com/DSz8ADlNS6

Hampe, who was booked into the Portland Police Central Precinct just before 6AM local time, has been charged with felony assault. His bail is set to $250,000.

A further investigation into Hampe’s identity reveals that he was previously indicted on charges of knowingly possessing child pornography in 2007 by the US District Court in Maine.