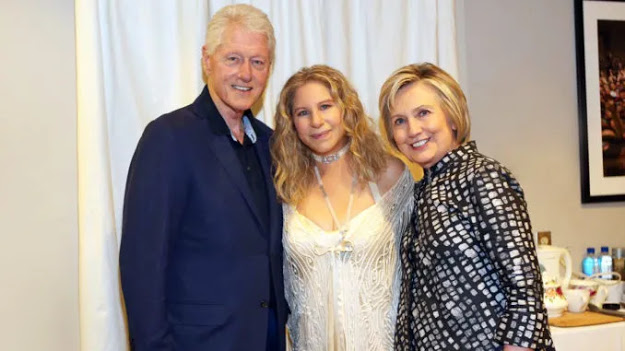 Barbra Streisand who is supporting Joe Biden in the next presidential election, delivered a scathing speech about President Trump’s ‘incompetence’ during a virtual Biden fundraiser on Sunday.

Streisand, who believes the violent rioting in cities like Portland and Seattle are “peaceful”, spoke for eight minutes about the ‘nightmare that is Donald Trump’, telling viewers the country ‘can’t survive four more years’ under his presidency.

Other Hollywood celebrities also took turns to have a go at President Trump.

Breitbart reports: But it was Barbra Streisand who had some of the harshest words for the commander in chief during a star-filled evening that included appearances by John Legend, Julianne Moore, Rob Reiner, Kristin Chenoweth and former Tonight Show host Jay Leno.

“Let’s face it, Trump is unfit, mentally and morally, to hold this distinguished office,” Streisand said during the event, which was streamed on Facebook. She adding that Biden is a “decent and ethical man with an open mind and open heart.”

Streisand described the violent rioting in cities like Portland and Seattle as “peaceful.”

“The military was designed to protect us, not attack us. But a few weeks ago, Trump called out the troops against peaceful protesters. That’s what cowards to when they are scared. Donald Trump has failed us,” she said. “And we cannot survive four more years of his incompetence. I’m sad and embarrassed by his lack of humanity.”

Joe Biden didn’t put in an appearance on Sunday.  Instead, donors were treated to appearances by Hillary Clinton and Pete Buttigieg. The gaffe-prone former vice president has made himself scarce in recent months, avoiding the spotlight and limiting his time in front the camera.