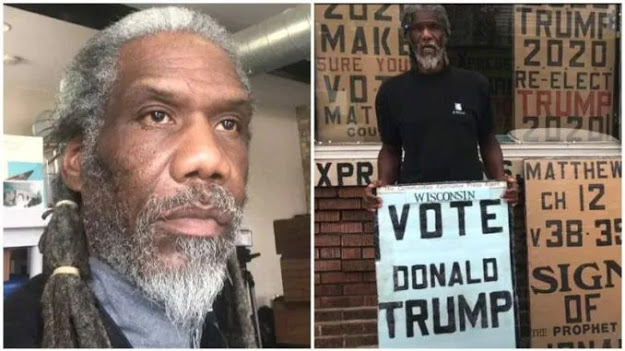 Black Trump supporter Bernell Trammell was murdered on Thursday afternoon in broad daylight in Milwaukee, Wisconsin just hours after giving an interview in which he urged his fellow African Americans to vote for President Donald Trump in the November election.

Hours later Trammell, who was known in his community as a respected and peaceful man with no enemies, was gunned down “execution style” in front of his store.

The shooting occurred in front of Trammell’s business, which is called Express Publications and is covered in signs, including most prominently signs saying “Vote Donald Trump 2020,” and “Re-Elect Trump 2020.”

Bernell Trammell was shot in the head execution style broad daylight yesterday in front of his store. He was a God fearing Trump supporting man. Was it because he was a Trump supporter? He didn't look for fights, he lived a good life. Sick and sad! @GovTonyEvers get it together! pic.twitter.com/Y75V7UODZM

The shooting led to the Republican Party of Wisconsin issuing the following statement from Chairman Andrew Hitt:

‘It is tragic to learn of the senseless murder of Bernell Trammell, and I offer my sincere condolences to his family and friends. Because of Trammell’s well known political activism and the possibility that his murder could be politically motivated, I respectfully request that United States Attorney Matthew Krueger open an investigation into this heinous crime. No American should fear for their personal safety because of where they live or their political affiliation.’

Shot to death over his political beliefs & influence?

Fox 6 station also spoke to Adebisi Agoro, who said he spoke to Trammell that morning about politics.

“He’s just a community figure,” Agoro told the TV station. “I respected him just because he had a position… He’s got his opinion on why he feels that way; and I’m not going to knock him.”

Janette Island told the Fox 6 that Trammell enjoyed talking about a variety of religions, adding, “It was very deep conversations, very philosophical. He was a really great guy. He meant no harm.”

One man wrote on Facebook, “OMG. Bernell Trammell was a most interesting man, strong in his convictions to God and the Christian faith Controversial, he was very personable to encounter. Just one of those interesting people that makes Milwaukee an interesting place to live and work in. Terrible loss here.”

Yesterday a person was shot and killed in my neighborhood. We don’t know why. He was a very verbal person about his opinions (signs, storefront, intersections) AND a very kind person with a smile for EVERYONE. He lived a life congruent with his beliefs and to the best of our knowledge hurt no one. I believe he lived that worthy life and am deeply saddened by his assassination (five shots is an assassination – thank God no one else was injured or killed). May the perpetrator be brought to justice. Rest in Peace Bernell Trammell. Thank you for the courage of your convictions and your smile for everyone. May your family find peace in this trauma. You will be missed!

Police say the shooting unfolded on a Thursday afternoon in broad daylight.

“Milwaukee Police are investigating a shooting that occurred on Thursday, July 23, 2020, at approximately 12:31 p.m., on the 900 block of E. Wright Street,” police wrote in a news release.

“The victim, a 60-year-old man from Milwaukee sustained fatal injuries. The circumstances leading up to the shooting are under investigation. Milwaukee Police continues to seek unknown suspects. Anyone with any information is asked to contact Milwaukee Police at (414) 935-7360 or Milwaukee Crime Stoppers at (414) 224-TIPS or P3 Tips App.”

Homicide in Milwaukee has increased dramatically in 2020, with the number of people murdered doubling over last year in July.