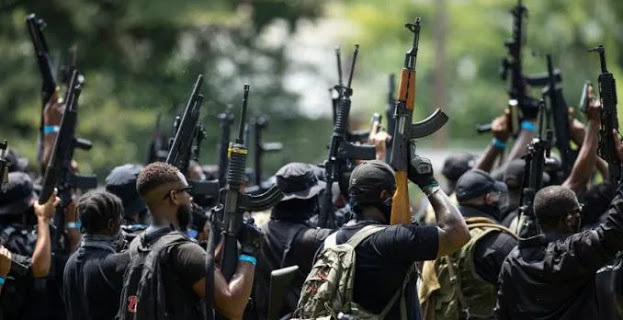 Two opposing, heavily armed militia groups came within a few dozen yards of each of other in downtown Louisville on Saturday in a tense standoff that ended without violence — except for a member of the supposedly “ex-military” black NFAC militia accidentally shooting three of his own militiamen.

NFAC is a black militia group described as an “eye for an eye organization” comprised of “ex-military” who “don’t want to negotiate,” that has demanded the United States give free land to all black people descended from slaves so they can form a black ethnostate inside the US.

Three people were taken to a hospital with non-life-threatening injuries after they were struck by gunfire when an armed NFAC militia member’s gun discharged at the NFAC gathering at Baxter Park.

“All involved are members of the NFAC, and there are no outstanding suspects,” LMPD Police Chief Robert Schroeder said. “This is a tragic situation that could have been much worse. I encourage anyone choosing to exercise their Second Amendment rights to do so responsibly.”

The III% Security Force was the other militia present. Their leaders had called on members to come out and provide “security” in the city.

The size of the NFAC march in Louisville needs to be seen to be believed pic.twitter.com/xaUR3YD0IT

Courier-Journal reports: More than 300 members of the Atlanta-based Black militia NFAC, or “Not F**king Around Coalition” came to Louisville demanding justice for 26-year-old Breonna Taylor, an ER technician who was fatally shot by officers in March.

Wearing all black and carrying assault rifles, members marched in military-style formation from Baxter Park in the Russell neighborhood to Metro Hall where they stopped around 2:45 p.m. at police barricades.

Right across was a smaller group of 50 far-right “Three Percenter” militia members, who were also heavily armed.

Members of the armed 3% militia bear city hall amid the NFAC Black militia March. They say they are just here to provide “security” @courierjournal pic.twitter.com/2cktqXSMvL

The opposing militia said it showed up in response to NFAC and to aid police. As the two sides neared, one Three Percenter yelled “Don’t fire unless you’re fired upon!” as police in riot gear stood nearby and helicopters buzzed.

Police kept the sides apart and tensions eventually dissipated. Both militias had said they wanted to avoid violence.

John “Grandmaster Jay” Johnson, founder of the NFAC, delivered a fiery speech calling for local and state officials to speed up and be more transparent about the investigation into Taylor’s shooting.

He ended a speech downtown by saying that NAFC is giving Cameron and the Breonna Taylor investigation four weeks from today to “tell the truth.”

After the group marched out of downtown, Louisville Police deputy chief Lavita Chavous acknowledged that it had been a “tension-filled day.”

“For the most part, we’ve seen peaceful protest,” she said, but she denounced “those hiding behind the right to peacefully assemble and using it as a platform to tear up and destroy our city.”

“I’m asking people to respect the legal process, and the time that it takes, to choose peace and not violence to continue to exercise your rights to protest, but do it lawfully,” Chavous said.

Although the group appears secretive about its origins, it comprises of armed Black “ex military shooters” seemingly seeking a Black state in the US.

NFAC's leader Grand Master Jay describing how he will build his black ethnostate inside the United States.
boasting they are all ex-military extremely disciplined & experts shooters
pic.twitter.com/8BOTyd7lTe

The NFAC has also distanced itself from peaceful Black Lives Matter protests, stating that they believe in an “eye for an eye” approach.

NFAC was previously seen during a George Floyd protest in Minneapolis where they were reportedly protecting Black-owned businesses amid the unrest in May.

The organization was also spotted in a Georgia neighborhood where Ahmaud Arbery, an unarmed Black man, was shot and killed by two white residents while he was out jogging. Source