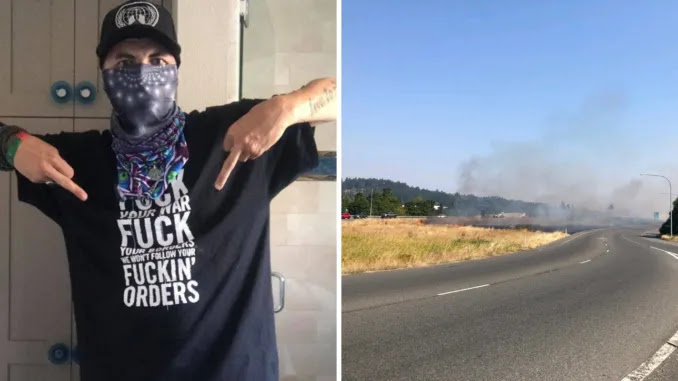 A Black Lives Matter protest leader has been arrested near Tacoma, Washington for “setting a fire” in the brush, as deadly wild fires continue to rage across the west coast.

Jeffrey Acord, 36, has been charged with reckless burning in the second degree after he allegedly started a fire in Washington and then live-streamed his subsequent arrest on Facebook.

Pierce County has a great team of law enforcement in this county serving all citizens in our county from many different agencies. We are happy to be a part of the team! This was a great arrest today! @wspd1pio @FifePD #proudofblue https://t.co/wj0PeUutdr

According to Q13 Fox, Washington State Patrol Trooper Ryan Burke reported that a man was caught setting a fire in the brush. State patrol also sourced a woman who cited a man walking on the highway in Sumner holding a lighter.

When an officer questioned Acord regarding his presence at the scene, the BLM protester claimed he was searching for his recording equipment, because the camera case allegedly flew out of his backpack while biking the previous day to his girlfriend’s place in Bellevue.

“I’ve been out here all day searching for my camera,” Acord told police, also noting the loss of his camera bag on the freeway in a prior Facebook post. “I’m trying to cover the area thoroughly.“

Acord was then arrested for implicating himself at the scene of the fire.

“There’s nothing you can connect to me to this at all,” Acord stated before the video cut out. “I was literally calling this in.“

PostMillenian report: Acord was detained with bail set at $1,000 and then transferred from the Pallyup City Jail to the Pierce County Jail where he was booked under a separate burglary charge.

Reckless burning in the second degree is a gross misdemeanor punishable by up to 364 days in jail.

Acord has a history of leading Black Lives Matter and far-left protests in Washington.

In June, Acord led a Black Lives Matter march in Seattle. Previously in 2014, Acord was caught with a cache of weapons and arrested during the Ferguson Decision Protest. Officers found the man carrying a 7-inch knife in his backpack, a box of ammunition, an assault rifle, a shotgun, and a box full of illegal fireworks in his car, according to a KOMO news report.

When officers contacted Acord, he admitted to carrying a loaded gun without a permit. His bail was set for $10,000. The following charges were levelled against him. 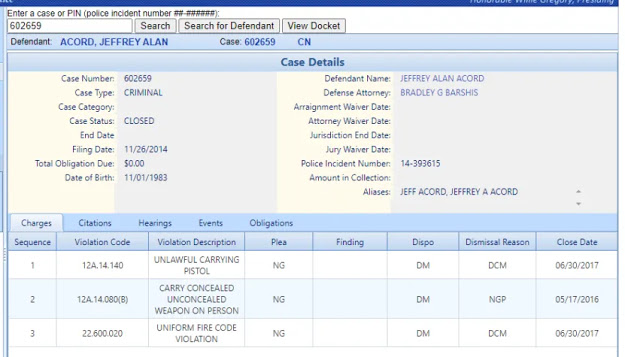 Acord attempted to justify the 2014 case as “a misunderstanding” to arresting officers in Wednesday’s camera footage.

“I was crucified,” Acord said to police.

Sources told Protester Privilege that Acord is now a suspect in two other local fires. As of Thursday morning, the Sumner Grade Fire in Sumner, that destroyed four homes, and Bonney Lake has burned more than 800 acres.

The unprecedented fires raging in Washington State have become a seasonal norm but some suspect arson because of the locations of the smaller fires in suburban neighborhoods and in proximity to interstate highways.

Residents of Bonney Lake told Kiro 7 news that they found broken glass with newspaper in the brush. Residents of Buckley Washington have reported similar claims in neighborhood social media groups.

In response to the allegations of arson, Washington State Representative Jim Walsh released a statement: “I am getting a lot of reports from residents of Washington State that the current wave of wild fires in Washington and Oregon may be caused or at least made worse by politically motivated arsonists. How could their motives be political? To set fire to blame them on climate change? … we have pretty good evidence that several of the major fires burning recently in Washington were human made but not arson. However, a larger number of the fires burning in Oregon seem to have suspicious origins and a growing number of people in Washington are reporting suspicious behavior on the part of strangers and visitors which raises concerns.”

An officer with believes the fires are suspicious and possibly man-made. pic.twitter.com/aEnrpJPuNX

Walsh continued: “Right now our focus is on containing and fighting the fires and keeping people safe as it should be. There will be time later to investigate the origins of the various fires.”