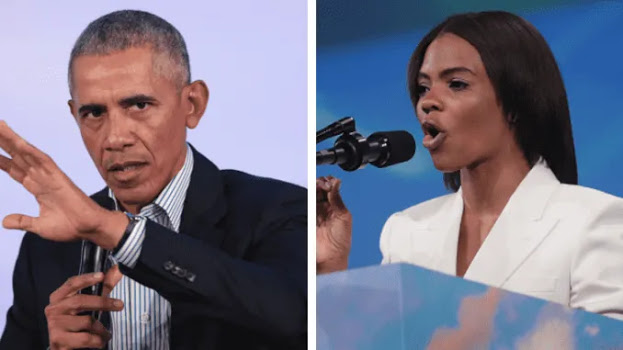 Candace Owens blasted former president Barack Obama on Thursday night, accusing him of turning his back on America, being disrespectful towards patriots, and being “the only president who has ever come out of the White House hating America.”

Owens was responding to claims made by Obama in his new book, to be published on Tuesday, in which he says that as a black president he caused a ‘deep-seated panic, a sense that the natural order had been disrupted‘ and that Trump used that national mood to win the 2016 election.

“For millions of Americans spooked by a Black man in the White House, he promised an elixir for their racial anxiety,‘ claims Obama.

During an interview with Sean Hannity on Fox News, Candace Owens slammed Obama’s scurrilous claims and said that he was voicing his deep-seated hatred for America.

‘The language that he’s using, the rhetoric that is coming out of former Barack Obama’s mouth is nothing short of absolutely despicable in my opinion,’ Owens told Hannity of the book’s accusations about conservatives.

Owens also told Hannity that Obama’s description of the Republican party as moving a fringe of ‘xenophobia and conspriacy theories‘ to the center of its party were ‘absolutely despicable.’

Owens also savaged Obama for showing a lack of respect to those who voted for him and a country which ‘gave him literally everything he has.’

Owens took a hit at the Democratic party in general as she accused them of seeing black voters as a ‘means to an end‘ and said that the Obama presidency did nothing to help black people because the party wants them to be a ‘permanent voting block‘.

The pro-Trump activist was speaking in answer to a question about Obama claiming in his upcoming memoir ‘A Promised Land’ that Republicans are xenophobic and paranoid.

Obama claimed that Trump was given the boost he needed to win the presidency because of the increased racial tensions caused by a black man being in the White House.

Daily Mail report: He also claimed the president was ‘delegitimizing democracy‘ and placing the country on a ‘dangerous path‘ in a clip of an interview with ’60 Minutes’ released on Thursday.

‘This is a man who ran on the American dream. Everyone remembers where they were the night Barack Obama won. There was a kinetic energy on the ground it felt like we finally had arrived at a place in this country where we could put the past on the past.

‘Rather than sow some unity, rather than show some respect for this country that gave him literally everything he has, he turned his back on the country and he said look at this despicable country, it’s broken,’ she fumed.

Hannity also asked Owens about why more black voters turned to Trump in the 2020 election, launching her into a scathing takedown of the Democratic Party.

‘I’ll tell you why,‘ Owens said in response to Hannity’s claims of increased opportunity for black Americans under Trump.

‘What Democrats do is they look at the black voters and they see them as a means to an end. They don’t ever want to repair the issues that are in black America because they want them as a permanent voting block and that’s just the truth.

‘And what is remarkable to me is is that they can’t look and assess things as they are.’

She claimed that Trump has been called racist more than ‘anyone else whose ever walked the face of the planet’ but that he still managed to increase his black voters this year.

‘Maybe it’s because we are getting something wrong,‘ she said of the Democrats.

‘There is something happening and people are standing behind Donald J. Trump because he’s an effective and a good leader who tells the truth and doesn’t run on identity politics.’