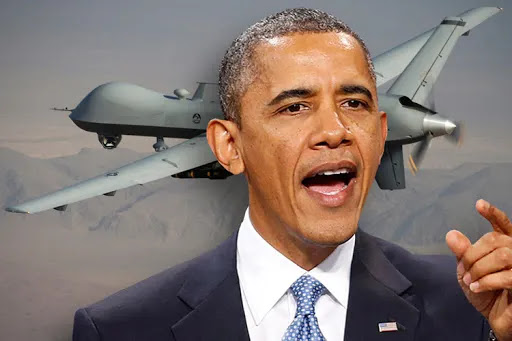 Barack Obama says that he “took no joy” in drone strikes, but ordered them to avoid looking “soft on terrorism”.

The former US president sparked an anti-war backlash after claiming in his new memoir that he ordered the deadly drone strikes because his administration “couldn’t afford to look soft on terrorism.”

RT reports: The ex-president’s new book ‘A Promised Land’ sheds some light on the Obama administration’s controversial expansion of the US drone program, which was launched under his predecessor George W. Bush.

One of Obama’s original campaign promises was for US withdrawal from middle-eastern conflicts. However, that promise was not fulfilled during his eight years in office, and the Democrat is now often accused of having further escalated violence in the region through his policies in Libya, Syria, and elsewhere.

Obama and Biden promised to end the US wars in Afghanistan and Iraq.

Instead, they expanded Bush’s wars from 2 to 7, and increased drone strikes ten fold. https://t.co/84zLcbApBD

In excerpts from the memoir published by Business Insider, Obama claims that his first chief of staff, Rahm Emanuel, was “obsessed” with the administration’s infamous terrorist “kill list.” Rahm had “spent enough time in Washington to know that his new, liberal president couldn’t afford to look soft on terrorism,” Obama writes.

Despite his willingness to ramp up the drone program, Obama confessed he “took no joy in any of this” and that it did not make him feel “powerful.” However, he adds that the work was “necessary” and that it was his responsibility “to make sure our operations were as effective as possible.”

However, the liberal political icon’s anti-war critics don’t typically argue that the drone program was ineffective, rather that it was more often than not imprecise, killing many civilians in the process. The ‘Drone Papers’ leak in 2015 revealed that, at least during one period, 90 percent of US drone strike victims were“not the intended targets.”

Obama infamously joked about the supposedly joyless drone strikes during a well-remembered White House Correspondents’ Dinner in 2010. The then-president jokingly threatened boyband the Jonas Brothers with assassination should they make a move on one of his daughters. “Boys, don’t get any ideas,” he said, “I have two words for you: predator drones.”

It did not take long for Obama’s critics to express their outrage over the new book excerpt. He was accused of being “Machiavellian” for signing off on drone strikes “for optics.” Others were appalled by the idea that he would kill “to look tough.”

“I’m sure [his comments] makes the families of innocent civilian casualties feel better,” another person wrote.

One person quipped that he had only “pretended to be into drone assassinations” so he would “have something to talk about with the generals.”