Dr. Deborah Birx: Americans May Have To Start Wearing Face Masks At Home 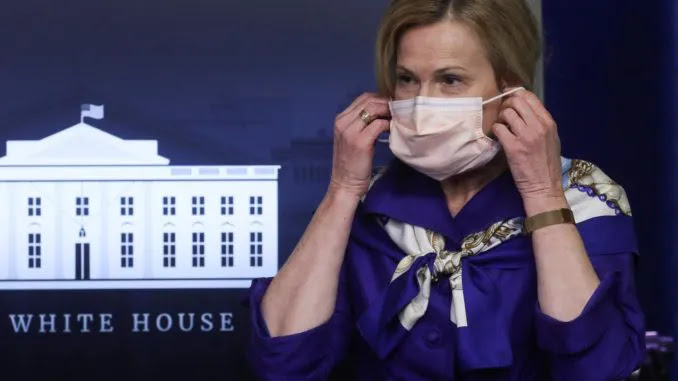 The White House coronavirus adviser Dr. Deborah Birx says that families might soon have to wear face masks in their own home.

Residents of areas with coronavirus outbreaks should consider wearing a mask at home, Dr Birx said

RT reports: With cases of coronavirus beginning to tick upwards across the US, Dr. Deborah Birx told CNN on Sunday that the country is entering a new phase in its fight against the disease.

“What we are seeing today is different from March and April. It is extraordinarily widespread. It’s into the rural as equal urban areas,” Birx, told ‘State of the Union’ host Dana Bash, before suggesting that Americans take even more extreme precautions against the virus.

“If you’re in multi-generational households, and there’s an outbreak in your rural area or in your city, you need to really consider wearing a mask at home,” she said, citing the threat to the elderly and people with pre-existing health conditions.

Birx’ recommendation comes as western and southern states grapple with an upsurge in cases. California now has more than half a million recorded cases of Covid-19, more than any other state. Florida has recorded more than 490,000, while Texas has seen a swell to more than 450,000. In all three states, cases began to trend upwards since mid-June, after lockdown protests and ‘Black Lives Matter’ marches brought crowds of people together, and hot weather lured people to beaches and vacation spots.

New York, however, still has a death rate above and beyond any other state. 32,000 people have died of the virus in the Empire State, a significant number of these in nursing homes, which were forced by Governor Andrew Cuomo to accept Covid patients.

Face masks at home may seem like a step too far for many Americans, but Birx is not the first person to recommend the practice. Residents of Miami and Miami-Dade County have been encouraged to mask up at home by their mayors, while Florida’s state Democrats have called for mandatory mask orders – which would extend to inside the home. In Broward County, local authorities have been sued for their mask order – which mandates masks at all times – or a $500 fine.

For Americans already weary of their leaders’ ever-changing mask policies – they were first advised not to wear them, then to save them for healthcare workers, and now to wear them at all times, Birx’ latest pronouncement left them sore. Fox News’ Jeanine Pirro declared that masks only serve to “dehumanize” and “frighten” people.

This is an incredible departure from what Birx and other task force officials told governors just a few weeks ago. On that call, they told governors that there was a way to reopen schools safely. They also said surveillance testing shouldn't necessarily be required https://t.co/nUxGTegsgT

President Donald Trump on Monday accused Birx of caving to pressure from House Speaker Nancy Pelosi, who allegedly badmouthed the doctor during a closed-door meeting last week, saying she has no “confidence” in Birx’ handling of the pandemic.

So Crazy Nancy Pelosi said horrible things about Dr. Deborah Birx, going after her because she was too positive on the very good job we are doing on combatting the China Virus, including Vaccines & Therapeutics. In order to counter Nancy, Deborah took the bait & hit us. Pathetic!

As of now, Birx’ recommendations are only optional, and the Trump administration has given no indication that it will enforce any kind of mask policy. The Centers for Disease Control and Prevention simply recommend that masks be worn when social distancing is difficult to maintain. Pelosi and a cohort of top Democrats, however, have called for the CDC to make their recommendation mandatory.

21.10.2020 laikas 20:55 Florida Deputy Arrested After Performing Exorcism On Son & Ordering Daughter To Shoot Anyone Who Entered Their Home
A now-former sheriffs deputy was arrested on child abuse allegations on Sunday after allegedly performing an exorcism on his son and then arming his daughter with a rifle and ordering her to shoot anyone who entered their apartment....

21.10.2020 laikas 20:50 Hunter Biden Text Msg Discusses FaceTiming 14-Yr-Old Girl Naked While Smoking Crack
Rudy Giuliani appeared on Newsmax on Tuesday night and revealed a “very, very sensitive” alleged text message from Hunter Biden to his father Joe Biden, which he claims to have handed over to the Delaware state police....

Trump supporters in Milford and Brookline, New Hampshire have received disturbing letters saying “You have been identified by our group as being a Trump supporter” and threatening to burn down their family homes “should Trump not concede the election.”