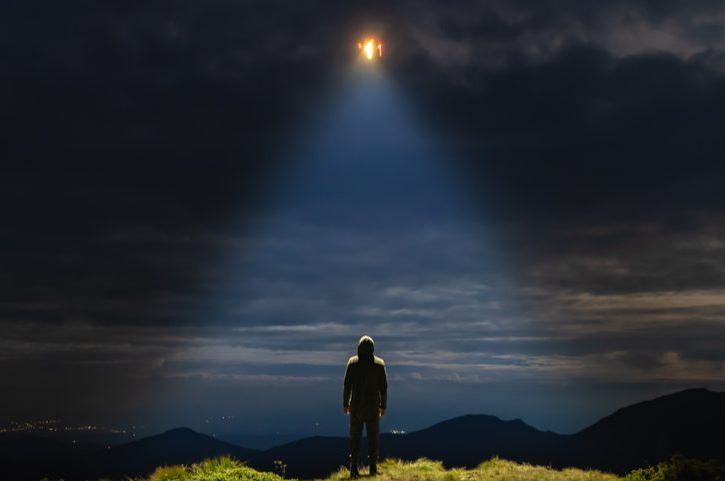 The case involved a scoutmaster in West Palm Beach, Florida, who had been close enough to a flying saucer to reach out and touch it. In fact, he probably would have if it hadn’t stunned him first with a heat ray!

The incident must have really shook up someone in the Air Force, because unlike the Washington sightings, Ruppelt received all the assistance he needed to investigate. Colonel Weldon Smith in particular expressed great interest in the case.

An Air Force B-25 came to Blue Book’s disposal to give Ruppelt and his assistant, 2nd Lieutenant Robert M. Olsson, personal and speedy transportation from Dayton, Ohio, to Florida. In addition, Ruppelt was under no time constraints. He even received special assistance from two other Air Force Captains, Hoey and Davis, who flew down with them and remained to assist.

Upon arrival, the ATIC team heard an interesting story from the witness. He was a curious character. A Marine during the war and supposedly a widely respected man around town, he was also scoutmaster of Troop 33.

Because the incident took place right after a meeting ofthe troop and involved some of the boys, it has ever since been referred to as the Florida Scoutmaster Case.

According to the scoutmaster, D.S. “Sonny” DesVergers, it all began while he was driving three scouts home that night. He turned off the coastal highway and down an inland blacktop to go where one of the boys lived.

After traveling about ten miles inland he noticed a bright lightin the palmetto thickets. At first he passed by it, but then stopped some way down the road and turned the car around to go back. He hesitated in doing this, but could not help feeling that the light might have been a fire, perhaps indicating a crashed airplane.

Despite the pleas from the scouts who did not want to be left alone, DesVergers got out of the car and headed into the thickets—a very dangerous thing to do in the snake infested south Florida swamps. About 50 yards off the road he entered the dense thickets and pushed through the waist-high brush. Suddenly a sharp pungent odor came across him.

The temperature also seemed a little warmer as he pushed 30 yards further through the undergrowth. Chopping the brush with a machete that he had taken from the car, DesVergers lit his way with one of two flashlights she had on him.

From the car the boys could see the flashlight beam and tracked his progress from its reflection. Knowing this, DesVergers periodically paused and shined the light up on the tree canopy.

After moving near an opening, he stopped again to signal his location. Suddenly at that very moment DesVergers felt overcome by a suffocating moist heat. He paused, wondering if the supposed clearing was actually a quicksand-like bog or a pond. Luckily the ground was quite solid, but by this time he had become a little more concerned about his location.

He cast the beam of the flashlight down so he could look up at the stars to try to figure out what direction he was facing. But to his great surprise, the stars were gone. Moments ago there were hundreds—now none. Then he realized they weren’t all gone, just the ones directly above him. “This just couldn’t be,” he thought—unless. Unless something was above him!

As his eyes slowly adjusted he realized there was a large oval object hovering only about 30 feet overhead. Slowly stepping back from this frightening situation, he shined his light up on it. Now he could clearly see a concave bottom beneath a smooth gray circular-craft. Stepping back some more he could see a dome on top of the object.

The edge of this “saucer” looked like it had evenly spaced veins every foot, with a type of nozzle between them. The former Marine was, to say the least, humbled by this sight and continued to give the craft further space. Suddenly, however, he froze in his tracks. A horrifying sound came from the craft.

It was the sound of a door, just like a heavy metal safe makes when opened. Feeling as angry as he was scared, he then found himself helplessly enveloped in a red mist. It seemed to originate from a ball of red fire slowly being expelled from the craft. This overwhelmed him, causing DesVergers to lose consciousness.

In the car the boys, Bobby Ruffing, Chuck Stevens, and David Rowan, claimed they saw their leader become surrounded by a big red ball of fire. Severely shaken by the sight, the boys piled out and ran down the road as fast as they could to the nearest house.

They found a farmer who called the State Police who were soon on the scene with a deputy sheriff, Mott Partin, to pick them up. Partin then drove the scouts to the sight of the occurrence to find DesVergers running out of the woods. He stated that the scoutmaster appeared sincerely frightened, more so than he had ever witnessed anyone to be in all his years of law enforcement.

The officers went into the thicket and found one of DesVergers’ flashlights still burning near some flattened grass where he had apparently collapsed. His second flashlight was never found.

Once they got him to police headquarters, officers noticed that DesVergers’ hands, arms, face, and cap were all burnt. Although the police may have been somewhat doubtful of the heat ray story, they decided to call the Air Force and thus initiated the investigation.

Ruppelt personally questioned DesVergers upon arriving in Florida. He did so at regular intervals, determining that he remembered details well, but did not repeat them in a rehearsed or exact manner.

Ruppelt’s experience with hoaxers indicated to him that this testimony stood in great contrast, showing sincere answers. An Air Force flight surgeon then examined his wounds and likened them to a mild sunburn with indications of singed hairs, suggesting in his words “a flash heat source.” The scoutmaster’s nostrils also showed signs of burns.

Ruppelt examined the sight of the encounter and found nothing to contradict the story. Neither, however, were there signs of scorched earth or grass, or residual radiation. But curiously (although not revealed until after laboratory tests were conducted in Dayton) the roots of the samples of grass extracted at the scene were charred.

This puzzled Ruppelt because his team personally collected them. They were from the undisturbed ground and while they didn’t pay any attention to the roots at the time, the grass blades were certainly not burnt. The scorched hat also fell under lab scrutiny which suggested it had been damaged by sparks of some sort, possibly electrical in nature.

Ruppelt felt satisfied it had not been burnt prior to the incident, as the boys had handled it earlier that night at the scout meeting. In fact, Ruppelt personally questioned the boys, even dressing in civilian clothes during the questioning so as not to intimidate them. His impression was that the boys were sincere even though they did not all give the exact same details.

It started to look like one of the better cases, perhaps the best case yet, but then things fell apart. In those early days of Blue Book investigations, background checks were still conducted.

The checks revealed DesVergers had been a Marine, but not a decorated hero as he often bragged. His records only had a dishonorable discharge to show for his war service. Nor was DesVergers a widely respected citizen as he claimed—just widely known.

Local area citizens stated that he was a likable enough fellow, but all agreed they wouldn’t believe him if he told them the sun was shining on a bright Florida afternoon.

Another complication arose when Ruppelt later returned to the area of the sighting and determined the scouts could not have possibly seen DesVergers overcome by the mysterious flame, even if they were standing on top of the car looking for it. The foliage was just too dense. And although Ruppelt interviewed the scouts again, he did not feel they were part of a hoax. Yet he did file it as such in the official report.