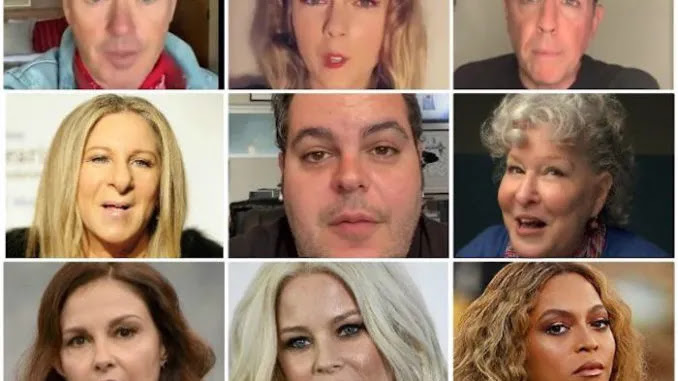 Far-left Hollywood celebrities are making a last ditch attempt to sway voters toward Joe Biden in the final hours before the presidential election, claiming that President Trump “will kill us with COVID” and that POTUS is literally the “Anti-Christ.”

Some anti-Trump stars are attempting to influence millions of followers by whipping up support for Biden in battleground states such as Florida and North Carolina. Others are predicting that it will take weeks before all the votes are counted.

Breitbart.com reports: Batman star Michael Keaton created another video urging Pennsylvania voters to turn out for Biden on Tuesday. “This is it. It has come down to us,” Keaton said, adding “We get the chance to be the hero, the buzzer-beater, the walk-off.”

Bette Midler tweeted Trump is the “Antichrist” and anyone supporting him is “covered in shame.”

Community star and comedian Ken Jeong — who is also a medical doctor — declared that President Trump “will KILL US with COVID!”

Taylor Swift urged people to cast their ballots in a brief video message that concluded with a Biden Harris poster.

The singer Common said he is knocking on doors in the Tampa, Florida, area to encourage voter participation.

Barbra Streisand pleaded with voters to choose “truth, decency, and common sense.” She also claimed that the president surrounds himself with “criminal cronies.” “He has no compassion, no class,” the singer-actress tweeted.

Guardians of the Galaxy star Dave Bautista and actress Lori Petty are urging people to vote blue to end the “nightmare” that is the Trump administration, using the hashtag #VoteBlueToEndTheNightmare.

Hamilton star Leslie Odom, Jr. helped push the Democrat’s message that the election will drag on for “awhile” as “all our votes” are counted.

The Hangover star Ed Helms urged people to vote and urged them to visit iwillvote.com, a site run by the Democratic National Committee.

Ant-Trump Frozen star Josh Gad posted a video in which he urged people to consider climate change and social inequality when voting.

Veep stars Anna Chlumsky, Tony Hale, and Sam Richardson are hosting a virtual reunion to drum up support for the Biden-Harris ticket.

Judging Amy star Amy Brenneman, who has endorsed Biden, urged people to “get out there and make your voices heard.”

Ashley Judd said that she will bring “masks, hand sanitizer, homemade cookies, positivity, and love” to the polls.

The rock band known as Greta Van Fleet posted a photo of their bare bottoms with the caption “Don’t be an ass, vote.”