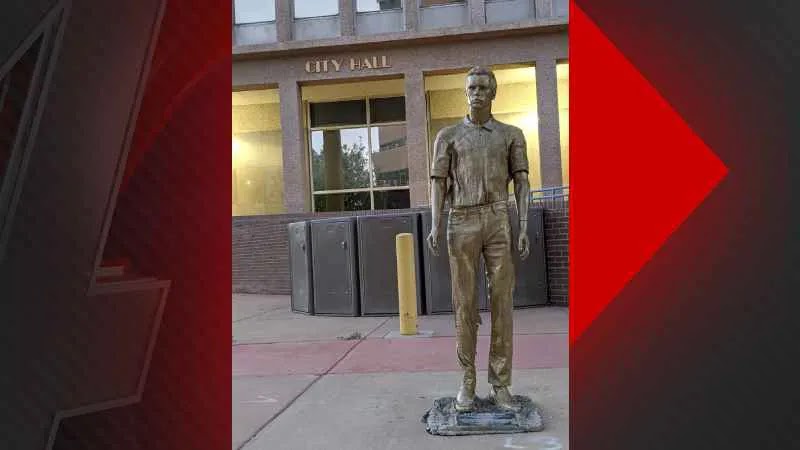 A bronze-colored statue of deceased pedophile Jefferey Epstein appeared in front of City Hall in downtown Albuquerque on Wednesday, according to local reports.

A plaque on the Jeffrey Epstein statue said it was “generously provided to Bernalillo County by the Antlion Entertainment ‘Art’ Collective,” however it is not clear who created the statue, or why it was placed in front of City Hall.

Albuquerque Mayor Tim Keller denied having any knowledge about the statue and said he didn’t know who was responsible.

The Jeffrey Epstein statue was removed Wednesday morning, according to local news outlets.

The notorious international child sex offender had a home in New Mexico, dubbed the Zorro Ranch, which reportedly housed a photo of former president Bill Clinton surrounded by topless underage girls, according to an anonymous contractor who worked there.

Pictures from inside the main house show a ‘party shower’ for up to eight people with four shelves full of toiletries and oils. The indoor bathing area has a large pool, hot tub and a framed shower behind it.

One of the bedrooms has a sculpture of a life-sized Jesus crucified on a golden cross, which covers most of one wall and is attached by chains to the crown molding.

The library is full of grand antique furniture, including Gothic chandeliers and metallic leather chairs.

An anonymous contractor, who worked at the ranch until 2006, revealed in an interview with Albuquerque radio station owner Eddy Aragon that it was just a normal working ranch, with only a few staff and little security – until Epstein and his friends arrived in town, usually twice a year.

He also claims there was a photo on show at the main house of Epstein with Bill Clinton surrounded by topless under-aged girls.

‘It’s a huge home, when you approach it, it looks like a resort hotel, way up on the hill, you can barely see it from the town down below, and there’s a long loop road up there and he’s got a small airport,’ he says.

‘It’s reasonably secure, some cameras, six or seven people [working there]. There was a ranch manager, a couple, who did the business operations. They were from New Zealand, husband and wife, [and] handled the management of the ranch. They were living at the front, not at the ranch. No one lived in the Epstein home apart Jeffrey and his entourage.

‘I think he brought more staff when he had his entourage, he’d come a couple of times a year and come with an entourage of 30 people or so. They would party there, pull out all the toys, the four-wheelers, all that sort of stuff.

‘I had seen things in the house, on the computers, which made me evaluate whether I should be working for him or not. There was numerous photographs in frames, in his library, his office, on the walls, of young underage girls topless and him and various other powerful people.

‘Celebrities, entertainment people, political people, Bill Clinton, he wasn’t shy about having those in the house… I have seen a picture of him and Bill Clinton smoking cigars on pool lounge chairs with underage topless girls.

‘He had weird lamps and sculptures of a sexual nature, couples engaged in [sex].

When asked about the giant shower area in the master bedroom, the contractor responds: ‘That was a party shower, everybody getting in. It’s a big shower. It’s amazing.’

On security, he discloses: ‘There were a lot of photographs being taken, they were all over [the ranch]. I noticed in the closets there were video distribution systems, which I initially assumed to be for entertainment, but now I’m not so sure. [They] may have hidden cameras in some of the rooms, that type of thing.’

He also claims that the estate is called Zorro Ranch in honour of the cartoon masked vigilante, saying: ‘The Zorro thing was a fetish thing for Zorro the character.’

Aragon says he also interviewed another former contractor, who revealed that Epstein built an underground club. In one picture, a spiral staircase leads downstairs although there are no images of the actual ‘club’.

‘It’s an underground layer of 1,000 square feet. Like a nightclub, with stripper poles, it’s not directly underneath the house. Most activity took place there, like dancing, hanging out, it was the entertainment area, no one [staff] was allowed down there, they installed cameras down there,’ he says.

He goes onto explain why he thinks ‘fixer’ Maxwell has been allowed to walk free by the FBI because she’s sat on ‘thousands of names and videos’, which makes her ‘untouchable’.

Aragon says: ‘The guy I spoke to installed this sophisticated camera system, with cameras in each room, and it all went through a main frame server, which went to either New York or Florida.

‘The point of the cameras was to record powerful people and for blackmail. Ghislaine Maxwell has thousands of names and videos, she’s threatening, if she gets pulled under, she’ll spill. She’s sending a clear sign that she’s untouchable. She has all that information.’