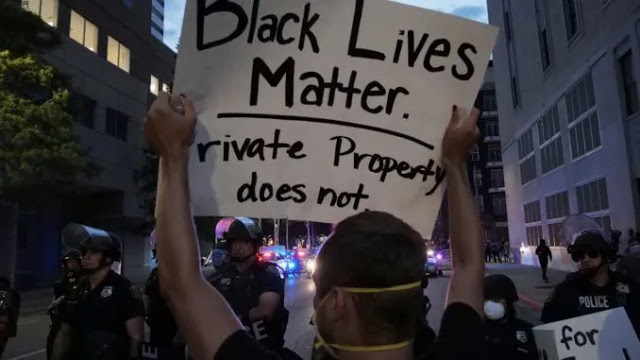 Black Lives Matter protesters are issuing “Mafia-style shakedown” demands to local businesses in Louisville, KY, according to a restaurant owner who says they ordered him to employ a certain number of non-white staff and distribute a percentage of business profits to organizations run by non-whites — or else face the consequences.

According to the BLM affiliate, “repercussions of non-compliance” include social media shaming, sit-in protests, and “invasive reclamation“, which is explained to mean “tables outside your establishment where competing Black proprietors will offer items comparable to those offered by you.“

Fernando Martinez, the owner of La Bodeguita de Mima, a restaurant serving Cuban cuisine, described Black Lives Matter’s demands as a Mafia-style shakedown. He characterized them as “Mafia tactics,” according to the Courier-Journal.

Breitbart report: Listed demands from a BLM affiliate in Louisville include racial quotas for staff and ownership of business suppliers, donations to organizations run by non-whites, and adjustment to dress codes. The posters used the acronym “BIPOC” (“black or indigenous persons of color”) as a euphemism for non-white persons:

23% of Staff is BIPOC in Front of House

23% of inventory is from BIPOC retailer(s)

Dress code policy does not discriminate against BIPOC patrons of employees.

Additional demands issued via the letter included the option to give 1.5 percent of revenues to a local “black nonprofit or organization” in lieu of purchasing a minimum of 23 percent of the business’s inventory from “black retailers,” mandated “diversity and inclusion training” for all employees, and displaying of left-wing messaging to support “reparations.”

The posters include a stated commitment to be publicly visible as a public service announcement pending future “inspections” of restaurants and other businesses.

Three varieties of posters with the message, “YOU CAN’T STOP THE REVOLUTION,” were directed at restaurants in Louisville’s NuLu neighborhood with the grades A, C, and F according to a “NuLu Social Justice Health and Wellness Code.”

Posters with the C-grade declare, “A facility that fails two (2) consecutive regular inspections will be under administrative review.” Those with an F-grade include the following message, “[This] facility has failed to meet minimum requirements of the Nulu Social Justice Health and Wellness Code inspection. This includes [a] failure to create a safe space for black inclusion.”

The letter includes neo-Marxist assertions, decrying “gentrification” as a “process [that] has been happening to black, indigenous, and persons of color at the hands of white, heterosexual patriarchy since the inception of this nation we call home. Black folx [sic] can’t ‘have their own space’ when wealthy white folks see an opportunity to make more money.”

“Repercussions of non-compliance” are listed in the letter:

Fernando Martinez, the owner of La Bodeguita de Mima, a restaurant serving Cuban cuisine, described Black Lives Matter’s demands as a Mafia-style shakedown. He characterized them as “Mafia tactics,” according to Courier-Journal, a Kentucky-based newspaper.

PJ Media reported on a public Facebook post from Martinez: “There comes a time in life that you have to make a stand and you have to really prove your convictions and what you believe in. … All good people need to denounce this. How can you [justify] injustice with more injustice?”

Local supporters and some from Louisville’s Cuban community held a rally to support Martinez’s restaurant on Sunday, which was vandalized in recent days. They said the restaurant “has been subject to vandalism and extortion in recent days.”

La Bodeguita de Mima was forced to close July 24 during a [Black Lives Matter] demonstration that shut down East Market Street, at which several protesters presented Martinez with the list of demands and said he “better put the letter on the door so your business is not f*cked with.”

The restaurant remained closed the next two days because “management and staff were concerned about safety,” according to the release. “30+ staff members (mostly immigrants) were unable to earn a paycheck.”

Chris Turner, a Louisville-based reporter, reported on a Black Lives Matter protest forcing the closing of businesses on July 24:

An “activist” affiliated with Black Lives Matter denied that his organization’s demands amounted to a threat.