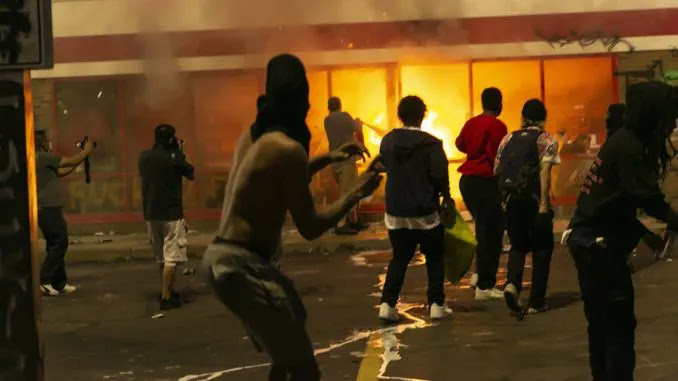 Minneapolis has imposed a citywide curfew and brought in the National Guard after a fresh wave of rioting and looting erupted in the city after a black murder suspect committed suicide and Black Lives Matter protesters falsely blamed police for the death.

Mass protests broke out in the Minnesota city after the black man shot himself, as rumors were spread that he was shot by police.

In an attempt to calm the protests, the Minneapolis Police Department quickly released graphic surveillance footage proving that the black murder suspect had fatally shot himself.

“This evening, a murder suspect committed suicide as police approached them at 8th and Nicollet downtown. No officer weapons were fired,” police said in a statement. “This is a tragedy for our community that is still hurting. Our condolences go to the families of the victims.”

But despite the footage being released online, large crowds gathered on the streets angry at what they perceived to be another example of a black male being killed by Minneapolis police.

Businesses were soon being looted as rioting broke out in the city, with gunshots heard.

Newsweek report: The killing of George Floyd on the streets of Minneapolis in May when officer Derek Chauvin knelt on his neck for several minutes sparked worldwide protests.

Officials condemned the disorder, which erupted during a press conference reiterating the death of the murder suspect was not an officer-related incident.

“We’re compounding more tragedy by the destruction and folks wanting to do harm to our communities in our downtown sector this evening,” Minneapolis Police Chief Medaria Arradondo said.

“This is my city. We will not tolerate that.“

Minnesota Governor Tim Walz declared a state of emergency in Minneapolis while also confirming that 150 National Guards will be brought in to help local law enforcement deal with the unrest.

“Minneapolis, it’s time to heal. We must rebuild and recover. Dangerous, unlawful behavior will not be tolerated. The Minnesota National Guard and State Patrol are headed to Minneapolis to help restore order. I remain in close contact with the city and every state resource stands ready to help bring peace,” said Walz.

Minneapolis Mayor Jacob Frey thanked Walz for his support after confirming the National Guard will be brought in.