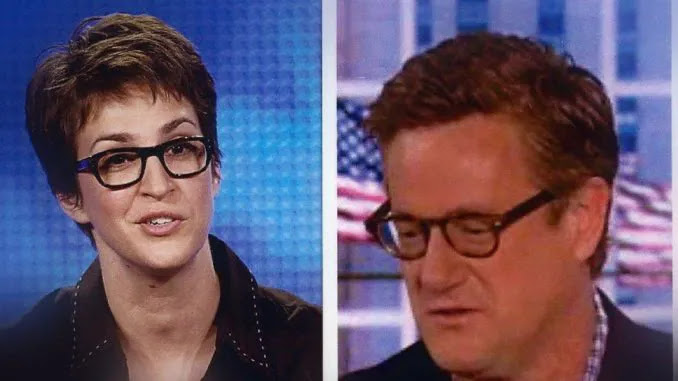 MSNBC producer Ariana Pekary has quit her job at the far-left network, while admitting MSNBC has turned into a “cancer” that “stokes national division.“

The senior producer follows in the footsteps of reporter William Arkin, a longtime and well-known military reporter, who esigned from his job with MSNBC last year while admitting the network has become infiltrated by Deep State operatives.

Ariana Pekary wrote an open letter on Monday explaining why she quit her job at MSNBC last week, admitting the network amplifies “fringe voices” in order to divide America, and forces “journalists to make bad decisions on a daily basis.”

Describing herself as an “integral member” of MSNBC’s “The Last Word with Lawrence O’Donnell,” Pekary began her letter by sharing quotes of what people said to her as she considered leaving the network due to the detrimental effect that it is having on American society.

It's not the optimal time for change but the time doesn't feel optional, anymore.https://t.co/HbZo0weiUs

“July 24th was my last day at MSNBC. I don’t know what I’m going to do next exactly but I simply couldn’t stay there anymore,” Pekary wrote. “My colleagues are very smart people with good intentions. The problem is the job itself. It forces skilled journalists to make bad decisions on a daily basis.”

Pekary said that at MSNBC it was “practically baked in to the editorial process” that decisions on what and who give coverage to were based on what would stoke the most division in society and generate the most ratings for the network. She said that behind closed doors “industry leaders will admit the damage that’s being done.”

A high-profile TV industry veteran told her, “We are a cancer and there is no cure. But if you could find a cure, it would change the world.”

“As it is, this cancer stokes national division, even in the middle of a civil rights crisis,” Pekary said. “The model blocks diversity of thought and content because the networks have incentive to amplify fringe voices and events, at the expense of others… all because it pumps up the ratings.”

“Context and factual data are often considered too cumbersome for the audience,” Pekary later added. “There may be some truth to that (our education system really should improve the critical thinking skills of Americans) – but another hard truth is that it is the job of journalists to teach and inform, which means they might need to figure out a better way to do that. They could contemplate more creative methods for captivating an audience. Just about anything would improve the current process, which can be pretty rudimentary (think basing today’s content on whatever rated well yesterday, or look to see what’s trending online today).”

Ariana Pekary is not the first senior MSNBC employee to quit the network in recent times, citing dismay at the state of the far-left network and it’s negative impact on American society.

MSNBC reporter William Arkin, a longtime and well-known military reporter, resigned from his job with MSNBC last year while admitting the network has become infiltrated by Deep State operatives.

According to the respected military reporter, MSNBC is now the “propaganda arm of the CIA and FBI” and routinely peddles disinformation to the masses.

Arkin recently blasted NBC News along with MSNBC news in an email for “becoming captive and subservient to the national security state, reflexively pro-war in the name of stopping President Donald Trump, and now the prime propaganda instrument of the War Machine’s promotion of militarism and imperialism.”