NBA Star J.R. Smith Caught a Rioter Vandalizing His Car: ‘He Broke My Window So I Whooped His A**’ 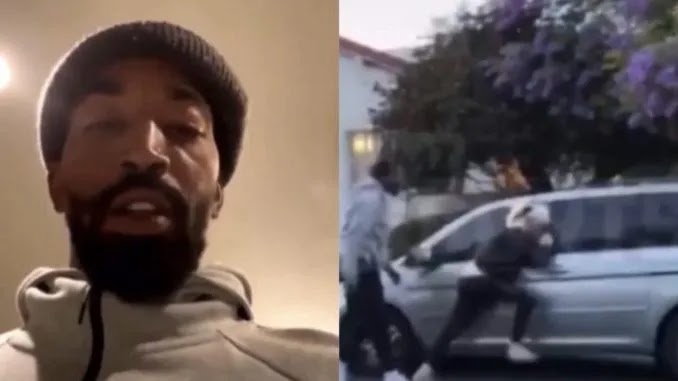 When NBA star J.R. Smith caught a protester vandalizing his truck and smashing its windows during a riot in Los Angeles over the weekend, he decided to take matters into this own hands.

The 34-year-old former Cleveland Cavaliers player was filmed kicking a person on the street crumpled on the ground with protesters carrying posters shouting for him to stop in the background.

Smith, who is 6’6 and 225 pounds, shared a video on Instagram Saturday morning explaining his attack before video of it emerged, claiming a white male had broken the window of his truck in the Fairfax area, according to TMZ.

DailyMail report: In the clip Smith is seen in a gray hoodie and black pants kicking the person in the head and gut at least four times as someone films on their phone.

The person finally is able to get up and run way as a protester is heard yelling, ‘stop, please stop!‘

The victim is believed to have been apart of the protests in Los Angeles against the police killing of black man George Floyd in Minneapolis on Monday, that turned violent.

Smith said in his clarifying video: ‘One of these mother***ing white boys didn’t know where he was going and broke my f***ing window in my truck.’

‘Broke my s***. This was a residential area. No stores over here. None of that s***. Broke my window, I chased him down and whooped his a**,’ he said nodding, noting that his car was located nowhere near where protesters were looting stores and destroying buildings.

Smith said he was releasing his video to make sure the public knew his side of the story before jumping to judgement, stressing the attack was not motivated by race or the protests.

‘The motherf***er broke my window and I whooped his a**. He didn’t know who window he broke and he got his a** whooped,’ he added.

Smith is currently a free agent and most recently played in the NBA during the 2018-19 season with the Cleveland Cavaliers.

He played in the league for 15 seasons and won a championship in 2016 alongside LeBron James. Source