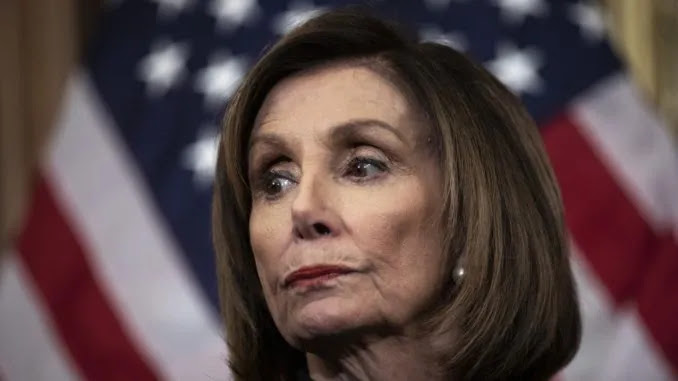 Hours after House Speaker Nancy Pelosi docked $5,000 each from the pay of two GOP congressmen for flouting her new metal detector rules, Republican politicians are demanding that she pays the same fine for committing the very same offense.

Speaker Pelosi broke her own rules this week by entering the House Chamber without going through security. We are demanding she face the same fines as every other member of Congress. pic.twitter.com/5yj8ZIMUUD

In January lawmakers were told they would face hefty fines if they refused to go through newly installed metal detectors to enter the House chamber.

Pelosi said the fines would be deducted from lawmakers’ salaries, $5,000 for the first offense and $10,000 for the second.

“It is tragic that this step is necessary, but the chamber of the People’s House must and will be safe” she said.

According to the NYPost: GOP members of the Committee on House Administration made the tit-for-tat demand Friday night, claiming Pelosi had been seen on Thursday entering the House Chamber without going through the metal detectors she herself had ordered installed after the Jan. 6 Capitol riot.

“Yesterday at approximately 9:59 a.m. multiple members observed the Speaker of the House entering the House Chamber without completing security screening,” the members wrote to the House acting sergeant in arms.

“We are demanding she face the same fines as every other member of Congress,” the GOP members of the committee tweeted Friday night, along with a copy of the letter.

Earlier Friday, The Post reported that Reps. Louie Gohmert (R-Texas) and Andrew Clyde (R-Ga.) were the first House members hit with the dramatic fine, which is taken directly from their $174,000 salaries.

Gohmert said he will appeal.

He said that he usually complies with the metal detectors, but didn’t on a single occasion after stepping out to use the bathroom.

“Unlike in the movie ‘The Godfather,’ there are no toilets with tanks where one could hide a gun, so my reentry onto the House floor should have been a non-issue,” Gohmert said in a statement.